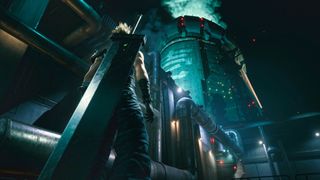 Final Fantasy is a pretty big deal. Well, that’s what I’ve gathered. As someone who writes about games for a living, my dark secret is that I’ve never actually played a Final Fantasy game to completion. Sure, I’ve dabbled here and there - a few hours of Final Fantasy X here and bit of Final Fantasy XV there - but I’ve never truly immersed myself in any of the games and, worse yet, apparently I’ve been playing the worst titles in the series.

As ashamed as I feel, there’s no denying that everyone has at least one huge game or franchise that they somehow completely missed the boat with: BioShock, The Witcher, maybe The Sims? For me, it’s Final Fantasy.

So, when Square Enix revealed it was remaking Final Fantasy 7 (apparently one of the best ones?), I didn’t quite understand the hype. Furthermore, I was concerned that Final Fantasy 7 Remake isn’t actually a game aimed at people like me who never played the original and once again I’m going to sit on the sidelines while social media blows up over the spiky-haired boy with the oversized sword and the porcelain-faced girl holding a flower.

This, coupled with the overwhelming Final Fantasy screamfest that was Square Enix’s E3 2019 conference, meant I was particularly apprehensive about getting hands on with the highly anticipated remake. But, Final Fantasy 7 Remake proved to be a game that is just as accessible for newbies as it is veterans and here’s why…

Roaming ‘round the reactor

Stepping into Final Fantasy 7 Remake initially can be a bit daunting for a newbie - it seems like there’s a lot going on already and quite a few characters to get your head around. The demo starts shortly after the first mission’s tutorial and introduction cutscenes.

The story, in the simplest face-value terms (and forgive me for my blasphemy, Final Fantasy fans), sees you playing as Cloud Strife - a mercenary who has been hired by a group of rebels called Avalanche to plant a bomb in the Shinra Electric Power Company, owned by a tyrannical company by the same name.

If you’ve ever seen anything to do with Final Fantasy then you’ll probably recognize Cloud, he’s the blonde, spikey-haired fellow wielding a giant sword. He’s apparently not got any personal investment in the bombing of Shinra and is only in it for the money – but it seems like he’s got some ulterior motive we’re currently unaware of. His face is kind though, so we’ll trust him for now…

Alongside Cloud is a very loud-mouthed muscle-man called Barret, a fan-favorite it seems, and some other rebel members who keep doubting Cloud’s intentions. While the characters may be somewhat confusing to keep up with for those of us unfamiliar, the story is pretty easy to follow - rebels are taking on the big bad corporation. Got it.

Getting to grips with combat

Once I get control of Cloud, I begin to make my way through the Reactor - with Barret by my side. The general mechanics are fairly simple to get your head around, with nothing surprisingly complicated: smash boxes, climb ladders, follow the linear path laid out before you. However, it’s the combat that had me concerned after having seen clips of Final fantasy’s turn-based gameplay - something my patience does not afford.

Fortunately, Remake has done away with turn-based combat and instead uses real-time combat, like that of Kingdom Hearts. That doesn’t mean combat is simply a hack n’ slash. While just slashing at an enemy with your big ol’ sword is obviously an option, the strategy comes in mixing that up with abilities and magic - accessed via the commands menu.

Causing damage to an enemy increases your ATB energy (the two bars in the bottom right of the screen, below your health). ATB energy is needed to use abilities and cast spells (which also use mana), with each using a bar of ATB. However, if you fill both bars then you can activate Tactical Mode, a slow-motion mode which allows you to take your time choosing which attack to use next, which item to snaffle or to assess your next move. According to Square Enix, this is to please players who preferred Final Fantasy 7’s turn-based gameplay by allowing them more time to strategize. Personally, I found it more useful for applying a potion when in a sticky situation.

In addition to playing as Cloud, Remake lets you switch between the characters in your party relatively simply. We only had bossy Barret in our party during the demo, but his ranged autogun attacks proved useful for gunning down enemies that were slightly out of Cloud’s reach. Essentially, you need to use the right character for the right job.

Having never played Final Fantasy 7 before, I was unaware that the end of my demo run would result in facing a giant robot scorpion creature, but it is the perfect way to get new players used to the strategic element of Remake. While, in some instances, using Cloud’s powerful sword slashes proved best for tackling the mechanical beast, others favored Barret’s machine gun (rather than getting blown to smithereens by the scorpions’s laser blast).

This boss fight is challenging, without a doubt, but never in a way that makes you frustrated. It’s a perfect balance between a battle that requires strategic thinking, quick reflexes and patience, without being too straight-forward and simple or, contrarily, blood-boiling difficult. When I finally slashed through my metallic foe, I felt like I had achieved something - I had worked for this victory and understood the combat better as a result.

It’s also worth noting at this point that the transitions between gameplay and cutscenes are almost seamless. The cinematics are truly stunning, with Midgard’s dark, steampunk setting emphasizing that this is a darker title than the Final Fantasy games I’ve dabbled with - and I’m definitely here for it.

Final Fantasy 7 Remake can be a daunting experience for anyone who hasn’t played the original, heck the whole series can seem like a mountain to climb. But, Square Enix has gone out of its way to create an experience that appeals to veteran fans and newbies, such as myself – and it seems it’s been a successful venture.

A key element of this is that the development team wanted Remake to feel like a new standalone game, digging deeper than ever into characters and their stories. That means new cutscenes, dialogues and other surprises - which everyone can experience together for the first time.

The big question is: can you enjoy Final Fantasy 7 Remake if you never played the original? Yes, I believe you can. I came away from this hands on eager to play more, learn more about the characters I had briefly encountered and explore the darkened streets of Midgar - I want to understand the hype. While I may not fully understand the cult impact Final Fantasy 7 has had on fans, I now understand it a lot better than I did.