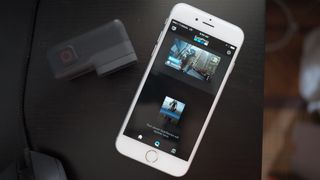 When we spoke to GoPro last month, its CEO Nick Woodman promised major updates to its apps were coming and now they’re here today.

GoPro has updated its iOS and Android apps with a new QuikStories feature, which automatically transfers your GoPro photos and video clips to your smartphone and turns them into ready-to-share videos.

All users have to do is connect their camera to their smart device and then drag down the home screen. This gesture will prompt the app to generate a polished video complete with automated edits with effects, transitions and music.

GoPro claims the QuikStories magic happens thanks to its specialized algorithm, which scans for interesting moments within the photo and video content – on top of those users have HiLight Tagged – and creates an edit with transitions and music to match the images.

Like Instagram, there are a ton of styles to choose from, including a nickelodeon-styled Dandy mode or the multi-framed Dashing preset.

We've been using the new app ourselves and came away impressed with the app. GoPro's algorithm seems much better tuned than DJI's app, which we used while reviewing the DJI Spark. That said, Microsoft's Windows Story Remix could be even more promising when it releases.

Of course, users can further edit their video clips by adding text, change styles, manually trimming and rearranging footage, speeding up or slow down clips, switching the music track, or altering the total video length among the many options. The GoPro app can also be told to pull non-GoPro footage stored on your mobile device.

The newly updated GoPro app with QuikStories is available to download now on the Apple App Store and Google Play Store.