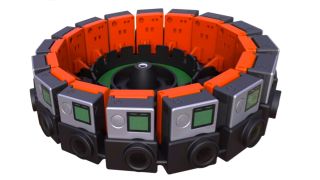 Google has announced the demise of Jump – a peculiar VR platform that captured 360-degree footage using a rig of 16 GoPro cameras.

Once the video had been recorded, it was stitched together using Google Cloud to make a seamless circle and fired directly to YouTube, ready for the headsets of viewers worldwide.

Google targeted the system at filmmakers, journalists and artists, but sadly the market there wasn't big enough to keep jump airborne. Those who are still using it are now receiving emails notifying them that the service will soon be closing.

In a way, Jump was ahead of its time. Since its release in 2015, the market for 360-degree cameras has really taken off and there are now lots of less cumbersome ways to capture stills and videos from all angles. Google believes this is the reason Jump's popularity has waned, and has decided it's the right time for Jump to end.

Google will stop accepting Jump videos for processing after 23:59 Pacific Time on June 26, so if you did take the plunge and invest in the system, you'll need to get any unprocessed footage uploaded before then.

If you do miss the deadline, you can use third-party video editing software to piece together the clips, but it won't be quite as straightforward as letting Google handle the heavy lifting.