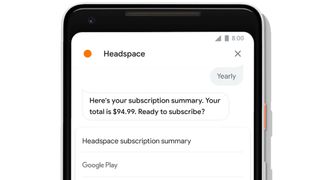 Google Assistant can already control your TV, smart home and understand multiple languages at once, but it's going to have to do more than that to keep its position as the smartest voice helper on the planet. And courting money-making app developers isn't going to hurt it.

Google has announced that it'll soon be letting you make purchases of digital goods through something called Actions.

While the online giant has let Google Assistant take your cash for physical products for a long time, this is the first time that you'll have been able to nab things like in-app purchases, such as subscriptions and game expansions, through the helper.

To make securing purchases safe and seamless, Google is also bringing the Google Sign-In account log-in method to Assistant. This allows users to make new accounts or enter details with voice, taking the strain off devs needing to build their own account systems.

All this comes alongside a richer visual experience for Google Assistant, as the voice helper expands to more screen-based home devices. With a revised Amazon Echo Show on the horizon, it's a timely update.