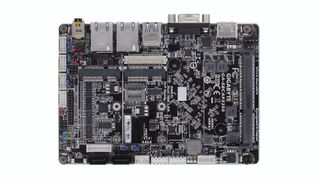 The Raspberry Pi was a magical innovation with its highly-compact form-factor, but what if you made it bigger in order to give the thing more flexibility? That’s exactly what Gigabyte has done with a new mini-computer board, the larger size of which grants the benefit of selecting your own memory and storage (and indeed potentially upgrading these components at a later date).

But you are free to employ whatever (supported) memory stick you want in the single channel DDR3L SO-DIMM slot, up to a maximum of 8GB (the CPU can’t cope with any more RAM than that).

And you get a mini PCIe slot to fit your choice of mSATA SSD, with a second slot for a half-length Wi-Fi card.

Connectivity includes dual Gigabit Ethernet connectors and a pair of USB 3.0 ports, and there are a further four USB 2.0 ports available via internal USB headers (along with various other headers including SATA, LPT/GPIO, LVDS and serial port headers).

For video output, you get a VGA port and HDMI, with the latter supporting 4K resolution at 30Hz.

Gigabyte also boasts that this miniature PC benefits from a 2X Copper PCB design and there’s a large aluminum heat spreader on the underside of the board, a combination that provides effective heat dissipation and better long-term reliability and lifespan.

While the company is pitching this board at commercial usage, looking at the full spec (and also considering that emphasis on reliability), there’s certainly no reason why this won’t make a great versatile board for the enthusiast computer tinkerer at home.

Unfortunately, there’s no confirmed launch date or price for the GA-SBCAP3350 just yet, but hopefully it’ll hit the market soon enough, and we can see how much it costs compared to the other Raspberry Pi-alikes out there (which are plentiful in number these days).