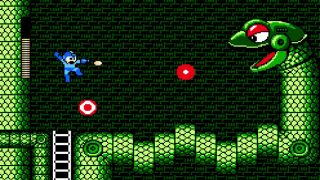 It's not 1990, but it may as well be. The Mega Man Legacy Collection, which has just been added to Steam, is easily one of the best nostalgia trips I've taken of late. It's gaming that calls out for pyjamas and a big bowl of sugar masquerading as cereal, a CRT monitor, and a day off school to focus on far more important matters - saving the world from robots once again, because someone has to.

Remembering this era pretty well, I'm often annoyed by 'retro' experiences. Often I play through and just don't see the games that I remember in them, with the truth having been heavily distorted through a mix of both rose and bile tinted glasses. The high difficulty levels for instance. Rubbish. Not every Nintendo game was Ghosts and Goblins mixed with Battletoads.

Yet still, when Capcom promoted Mega Man 9 as a revival of the NES games, it took pains to talk about how difficult the early games were, when really beyond a couple of bosses (the Yellow Devil being the most famous, if you didn't know the pause cheat) they weren't that tricky. Mega Man 9 meanwhile had an annoying tendency to fall back on those false memories, especially with things like enemies jumping out of pits at exactly the wrong moment. Grr, on many levels.

More notably, the general 'look' of games is wrong. The surgical use of pixels and dithered backgrounds for instance, which is now what people associate with games of the 90s, isn't actually what we saw at the time. Old televisions didn't have the crispness of LCD. Their blurriness softened all of those edges and colours, with smart developers using that to their advantage - Sierra in particular largely pioneering using the few colours early graphics could offer, and letting the TV blur them into a wider palette.

Wider afield, there's often a strange perception that old games were somehow working from a holy design sheet, rather than - like modern games - the sum of their limitations as much as their pieces. Limited sprite counts, map sizes, music and so on. Very few developers weren't happy to leap to 16-bit as soon as the money was there.

But I digress, and I don't want to in this case, because I love what Megaman Legacy Collection does. It's a warts-and-all recreation of the original games that feels pretty much bang-on to me, right down to the slowdown and sprite flicker when there's a lot of stuff on screen, and the occasional bullshit death where a screen scroll will shove you off a platform.

The goal wasn't to remake, or simply re-release it, but to remaster it. You get higher resolutions that look lovely and crisp, and a couple of gimmicky things like TV scanlines to turn on and off as you choose, but mostly it's the games from the 90s as the 90s offered, if not necessarily as they intended. (And thankfully it doesn't include the original Megaman PC games, which almost nobody even knows exist, but were worse than falling off a cliff and having a field of cactuses break your fall.)

The basic goal of its creators is to make the gaming equivalent of the Criterion Collection, and that's a worthy one. It's something that's always going to work better for games like this, with their iconic 2D graphics that represent the best of a generation, than 3D stuff that isn't just quickly outclassed, but quickly made to feel ridiculous.

It's not that you can't play the games with an emulator if you want to, but I definitely preferred this more than the last time I definitely didn't do that because that would have been wrong. In many ways, it's what the game doesn't have that makes it better. Save states for instance, which destroy games not designed for them. What it adds to the original though is well chosen, including a challenge mode that unlocks remixes of stages and other fun stuff for players who already know the main game, and useful abilities like being able to practice on the worst of the bosses.

It's retro done right, in short - playing with the original game without touching its soul. That's a rare trick, easier in existing games than new ones, but still very prone to mistakes. Horrible graphical filters that smooth out the rough edges of things. Playing poor quality versions of music that don't sound like the original sound chips.

Knowing what is part of the experience and what's a bug, like Megaman's trick with the Electro Beam that renders the bosses in the first game no threat whatsoever from the moment you pick it up, or the appalling Boobeam Trap in the second game which I wouldn't have minded seeing cut out of the game with an arc welder, but shouldn't have. It's important to look back on these games for what they did right, but there's just as much to be learned from what they did wrong, and that's often just as worth remembering.

In short, if you want that nostalgia Megaman kick, I highly recommend it. If you missed it first time around though, well, it's still great, but you're probably not going to 'get' it in the same way. If so, you should check out the more recent Shovel Knight for good retro times. It's very similar to Megaman in style, mixed with Castlevania and Zelda 2 and a few other games, with a retro aesthetic that generally sticks with what 8-bit machines could do.

It's much prettier, able to draw from far more palettes over the course over the game and provide much smoother control and more items and text and cut-scenes than would have fit into an early cartridge, but it nails the general feel of the era's style better than anything else I've played in years. It's certainly not a surprise that it's due to be the first indie Amiibo over on the Wii U.

I particularly like a scene where you're running through a castle and have to spot fake platforms by whether the rain splashes on them. It's cheap, awesome, not too difficult, and there's a whole new campaign coming soon called Plague Of Shadows, which swaps the titular Shovel Knight for one of the baddies and remixes the game to play with his different abilities. Bomb jumping, alchemy, wearing a cool mask! I'm really looking forward to it, especially after taking entirely too long to get around to playing the original. It'll no doubt lead to some great speed-runs as well.

The fact that they're still great games certainly doesn't hurt, even if it's still eye-rolling when they got so stuck for new robot ideas that they came up with Dust Man and Sheep Man of all bloody things. There's certainly worse ways to kill some time this coming bank holiday, even if not going to school has been replaced by not going to work and it's a little harder to get a high-five from your friends for saving the world like it's 1990. Again.