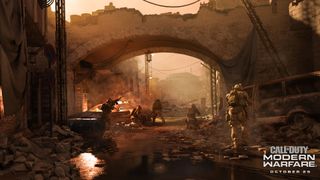 Normally, after a game demo concludes, there’s a brief moment of applause for what was just presented. It’s a small token of appreciation by those in attendance, a thank you for the work that was put into the demo that just played on-screen and a rare chance to give some direct adulation to those who work so tirelessly on these games.

After our recent Call of Duty: Modern Warfare demo ended, however, that applause was nowhere to be found. The group of us, 10-15 total, sat in stunned silence absorbing what we’d just saw. However, where some might think that silence insulting, we’re willing to bet that reaction was exactly what Infinity Ward, the game's developer, was looking for.

Call of Duty: Modern Warfare will try to set a new bar in storytelling for the franchise later this year, and the 20-minute presentation proves it’s taking a different approach - one that’s more dramatic and impacting than ever before.

The demo presented to convention goers starts off with the Infinity Ward team explaining what’s going on in the scene we’re watching: there has been a terrorist attack in London’s Piccadilly Circus leaving dozens dead or wounded, and those responsible are tracked to a three-story townhouse in northern London.

It’s up to a special task force comprised of Sergeant Garrick (the player’s character), Modern Warfare mainstay Captain Price, and two other British special forces operatives to infiltrate the house and neutralize the cell, with orders to shoot any hostiles on sight.

For Call of Duty, this is well-trodden ground: terrorists attack a city, the troops are sent in to neutralize the threat, and the story unfolds from there. No one would claim that Infinity Ward is reinventing the wheel with this premise. But while you'd expect it to be all flash and bombast from here on out, Infinity Ward takes things in another direction entirely.

...told in an unfamiliar way

Back in the game, the troops assemble at the back door of the house in the dead of night, sneaking through tight alleyways in order to reach it. After a brief pause they enter the home, night vision equipped, and find a small group of people at a table discussing the attack. We don’t even know these people are terrorists until one calls the attack “a failure” and starts to discuss next steps.

Once we have that audio clue, the fight is on.

Price shoots out the lone light bulb in the room and the team moves in, taking out the armed men and women one-by-one. Bullets hit the bodies with precision, the enemies slumping into lifelessness with sickening realism. We hear muffled sounds above us, loud whispers and shouts of warning, as the team slowly ascends the narrow stairs.

On the second floor each team member takes a door and opens it, with player character Garrick finding a single woman with her hands up. She reaches for a rifle and Garrick fires, killing her instantly. Later we’d see another woman make a quick movement, but this second woman instead picks up a baby and consoles it. Garrick does not shoot, but we are left not knowing what would happen if he had.

We hear more commotion toward the bathroom, and as we approach bullets suddenly explode through the door. A few shots into the wall later, and we see our assailant lying in the bathtub in his own blood. After some more action above us it’s time to ascend again, taking the tight staircase to floor three.

It’s more of the same here, but one of the special forces is shot through the door he chooses by a terrorist, leaving us one man down for the rest of the mission. Once the third floor is cleared we go up to the attic, where we meet one final woman with her hands up. She pleads that she has been forced to stay up there, that she’s innocent, before she moves toward a nearby table and is shot dead. It’s discovered that she was going for a detonator, to what is never explained, and Price remarks that they were lucky to have neutralized her.

The demo ended here, giving us some time to catch our breath and mentally process what just happened.

What lasted about 20 minutes felt like it went on for ages thanks to the slow, methodical pace of the demo, and all of the elements that led to that feeling are in line with Infinity Ward’s new approach to Modern Warfare.

This was a demo focused on bringing us war as it’s fought now, not as was “modern” back when Call of Duty 4 debuted in 2007. It’s a remarkable shift in format and tone, one that we certainly did not see coming.

The name Call of Duty carries with it an expectation of bombast and a pageantry of sorts, loud explosions and deafening gunfire raining out of every battle. A few well-known examples withstanding, previous games were marked with adrenaline, each of them coming out of the gates guns blazing.

This new Modern Warfare eschews all of that, instead ramping up the tension with deafening silence, total darkness, and building tension through tight quarters. Each step on those staircases made our muscles tighten, each opening of a door filled with anxious anticipation. This was less like Call of Duty games we’ve come to know over the years and more in line with a nuanced film like Zero Dark Thirty.