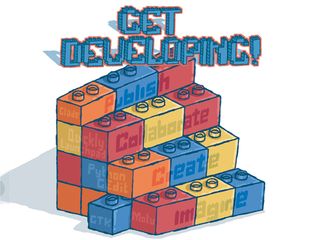 Linux has a long history of software development, and a flourishing range of applications that meet even the most bizarre of needs.

A quick poke around freshmeat.net is testament to this, with its rich tapestry of useful, wild, and often wacky apps. Distros such as Debian, Fedora and Ubuntu bring these applications to their users with a quick apt-get or a yum install.

As this work was going on, Apple released the iPhone and made a major breakthrough in computing; it made the application developer platform attractive, consistent and accessible to consumers. Anyone with an iPhone could download a range of apps, many simple and silly, but all consistent in their presentation, and often new and innovative in how they used features of the phone such as the GPS, accelerometer and other facilities.

Apple built this platform from scratch, but thanks to the work put in by the GNU project and countless others, we already have a platform. We have a rich set of development tools, a range of desktop environments and a wide range of development forges packed with source control, bug tracking and other features.

While we have had the tools for a long time, what we have done less of a good job at is pulling these tools together into a consistent experience aimed at application authors. This is something that the Ubuntu community is working on, and we're going to look at some of this work and how it's useful for the wider open source ecosystem – that includes you too, non-Ubuntu fans!

Developers are funny beasts. Although from the outside they seem like a fairly consistent menagerie of code-writing, beer-drinking, pizza-eating creatures, their motivation and desire around the art of writing programs varies.

Within this variety though we can discern two sub-sets: systematic and opportunistic developers. Both write code, but each motivates themselves and approaches their work in slightly different ways.

Systematic developers are typically professional developers. They're the kind of people who will write a feature, and then immediately document it, write an automated test suite for the feature and will always be thinking structurally about their application today and how it will scale and grow with future considerations.

Systematic developers are the very definition of professionals, and they are commonly conservative, cautious and resistant to adding features unless they are implemented with completeness and precision. Systematic developers commonly commit themselves to a single project for long periods of time and often grow significant generalist knowledge of the codebase, becoming almost tribal elders in their respective projects.

Opportunistic developers are the inverse of many of the properties of a systematic developer.

Opportunistic developers are interrupt-driven hackers who are in the business of scratching itches. They feel a problem or smell an opportunity and will often have a first cut of code ready within a matter of hours. They are often much more shoot-from-the-hip types of folks, their code is sometimes not well commented, and unit tests are often a low-priority item on a to-do list somewhere, but these attributes don't necessarily mean they are inferior coders.

They are often excellent coders, but they are reactive, energetic hackers who love to solve problems that they feel personally and are passionate about.

When developers want to produce software they enter into a four-step process: Imagine > Create > Collaborate > Publish. This broad high-level set of steps can be broken down into a more detailed set of steps, which break down into the following elements:

1. Ideas: This matches the Imagine step of the higher-level process; thinking of ideas of software to work on.

2. Gnome/KDE: This matches the Create step of the higher-level process; using a preexisting development platform to create your application with.

3. Launchpad/BZR: This matches the Collaborate step of the higher-level process; using Launchpad and Bazaar to work with other developers to make the application better.

4. Debian Packaging/PPA: This matches the Publish step of the higher-level process; packaging your application and then publishing it to a Personal Package Archive, which enables others to download and install it like any other package.

Let's now take a look into some of the work and projects that have been going on to simplify and improve this process.

The very first step is to imagine a solution to a given problem.

At this very first stage the developer needs to feel empowered to have the motivation, tools, skills, and determination to implement the vision that they see in their minds. Although this sounds like a simple first step, it is a challenging one.

To optimise it there needs to be a wealth of positive stories of how developers have dreamed up solutions to problems and effortlessly implemented them because the platform was a help rather than a hindrance.

In the Ubuntu world we have tried to build an atmosphere around the concept of Ubuntu providing a complete and comprehensive platform for implementing whatever solution the developer dreams of. We have done this by organising events such as Ubuntu Application Developer Week and creating support resources such as the #ubuntu-appdevel IRC channel on the Freenode IRC service.

With the motivational element of opportunistic developers a story of encouragement and outreach, the following three steps in the four-step process are very much about technology, and the goal is about lowering the barriers to get people up and running as quickly and easily as possible.

Over the years a vibrant developer community has formed, complete with a vast array of tools, languages and functionality. Unfortunately, while powerful, many of these tools are awkwardly complex, and many developers have let their ideas and creativity get buried under an avalanche of confusion around how these tools fit together.

Part of the cause of this problem is that many developer tools only cater to systematic developers; the kind of codewriting workaholics we mentioned earlier who hack for a living, with a fervent attention to detail backed up by unit tests and other hallmarks of the professional programmer.

For many opportunistic developers, if the tools needed to scratch their itch require too much effort or investigation, the itch can quickly disappear and what was once a creatively excited hacker has now moved on to be a couch-bound excitable PlayStation gamer who grew bored with Linux as a platform.

A solution to this overt complexity in the toolchain was a simple tool called Quickly. Quickly was the brainchild of the now director of Ubuntu engineering at Canonical, Rick Spencer. Quickly gets you up and running quickly (it's not just a clever name) writing an application from scratch.

Traditionally, writing desktop applications has involved a not-insignificant amount of faffing required with build systems, source control, packaging frameworks, graphical interface tools and other things that get in the way of writing code. Quickly is a tool that simplifies how these different things fit together.

Quickly provides a framework with a series of templates for creating different types of applications. With each template a series of decisions are made about the tools involved in creating that application. By far the most popular template, and the one that Quickly itself was created to satisfy, is the Ubuntu template.

This template uses a set of tools that has become hugely popular in modern desktop software development, and tools we have harnessed in Ubuntu. They are:

GTK: A comprehensive and powerful graphical toolkit for creating applications, and the foundation of the Gnome desktop environment.

Gnome: The desktop environment that ships with Ubuntu, offering many integration facilities.

Glade: An application for developing user interfaces quickly and easily, which can then be loaded right into your Python programs.

GStreamer: A powerful but deliciously simple framework for playing back and creating audio, video and other multimedia content.

DesktopCouch: A framework for saving content in a database that is fast and efficient, hooks neatly into Ubuntu One and is awesome for replication.

Gedit: For editing code, Quickly assumes you are going to use the text editor that ships with Ubuntu, which provides a simple and flexible interface for writing your programs.

With this core set of tools you can write any application you could imagine and know that it will run effortlessly on Ubuntu and other distributions. The elegance of Quickly is that it understands a common platform for Linux but does not try to complicate the desire for simplicity by being tempted down the slippery slope of investing months of energy into an Interactive Development Environment (IDE), when many Linux users are in fact comfortable with the command line.

Current page: How to develop for Linux