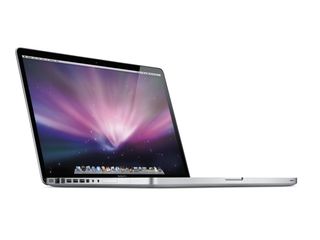 It comes to something when the most exciting thing you can say about a new laptop is that it has an amazing battery – but that's exactly what Apple VP for marketing Phil Schiller did during his keynote speech at Macworld Expo on Tuesday. And to be fair, he has a point.

The rechargeable batteries in most laptops crap out after just a few hours use – and last even less when you have things like Wi-Fi, Bluetooth and other goodies turned on.

Yet Apple is claiming an eight-hour battery life while surfing the web wirelessly, something that's no mean feat in a laptop that has a 17-inch display.

Apple has been able to achieve this by changing the way it uses batteries inside its laptops.

Just like the MacBook Air, iPhone and iPod, the new MacBook Pro 17 features a non-removable battery that has 40 per cent more capacity than its predecessor and can last for up to 1,000 recharges – three times longer than the industry standard.

To achieve this, Apple is now making its batteries from lithium polymers – ultra-thin sheets of charge-storing materials that can be rolled, flattened and formed into almost any shape.

Apple says this has numerous advantages over conventional laptop batteries, which are essentially a series of cylindrical AA-type cells slapped inside the battery pack.

The use of lithium polymers enables you to eliminate wasted space inside the battery pack. Making the battery non-removable also enables you to take out the mechanisms, doors and other pieces of laptop infrastructure that hold traditional batteries in place.

Result? A 40 per cent bigger battery that is the same size, weight and price as the one it replaces.

Of course the very idea of a non-removable battery in a laptop seems almost inconceivable – everyone knows batteries gradually lose charging capacity over time, and you never know when you'll need to swap one out on the road. Apple obviously believes it's solved the last problem already. But what about the first?

For that Apple has come up with a technique it calls Adaptive Charging. It points out that most laptops batteries are charged at a constant rate, no matter how much or little individual cells inside the battery need topping up. This can lead to the premature death of the battery.

Apple's Adaptive Charging system uses a microchip inside the battery that measures the amount of charge inside each cell, passes that info on to the system controller, which then allocates the correct amount of charge to each cell.

Obviously having longer-lasting batteries is only part of the story. It also helps if the rest of the laptop is economical with its power needs too.

Apple actually has a long history of effective power management in its laptops that goes right back to the PowerPC days.

The Nvidia graphics inside all current MacBook Pros are switchable, so you can use the full 512MB of video memory using the Nvidia 9600M GT when the laptop is plugged into the wall, but switch over to the 256MB Nvidia 9400M when running on battery – the difference is around an hour of battery life.

The LED display the MacBook Pro is also equipped with helps cut demand for power by up to 30 per cent when compared to regular LCD screens.

The result, Apple says, is that the 17-inch MacBook Pro uses half the power per hour of a regular incandescent light bulb, that's around 50W.

Apple claims the non-removable battery inside the MacBook Pro will reach 80 per cent capacity after five years of use. That should help ensure the battery has a very long life compared to conventional laptop cells.

Replacements, though, will need to be installed by an Apple-qualified technician. Apple says replacement batteries will cost £139 inc. VAT, which includes installation and environmentally-responsible disposal of the old one.