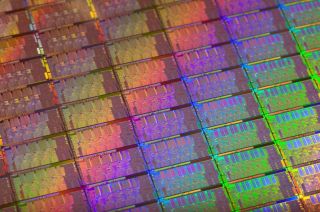 And as usual, we're first out of the blocks with a batch of reviews of compatible motherboards, a full system and, of course the processors themselves. Click the links in this article to get to the reviews.

Our first taste of the new chips comes in the form of two desktop CPUs - check out our Intel Core i5-2500K review and Intel Core i7-2600K review - ignore the familiar branding, these are all-new units.

At launch, it's not quite a full range of processors. Intel is rolling out 14 new desktop CPUs based on Sandy Bridge under the Core i3, Core i5 and Core i7 brands. Pricing extends from around £75 to £250.

The very top and bottom of Intel's desktop range will remain unchanged. The six-core Gulftown derivative of the Core i7 and the entry-level Pentium chips live on for now - though we're really not sure why. Everything else is effectively supplanted by Sandy Bridge.

Our Asus Maximus IV Extreme RoG review shows this is the quickest Sandy Bridge board we've tested, but then we haven't seen many yet. Still, it's worth noting that we achieved our highest air-cooled overclock of Sandy Bridge, an impressive 4.6GHz, with this board.

The MSI P67A-GD65 review shows it represents something very different from the Asus Maximus IV Extreme that's also just been released. It isn't necessarily aimed at the high-end enthusiast segment. It's a board for people wishing to build up their new platform with a reasonable feature-set and at a reasonable price.

Finally, if you're going to make the migration to a new Sandy Bridge system, why not consider a small-form-factor board, such as that examined in our Foxconn H67S review?

Our Scan 3SX Vengeance review tests the first full PC we've seen to actually put the new second-generation Intel Core platform into context. Sandy Bridge platform is good, but until you actually see it in a machine, it's tough to quantify.