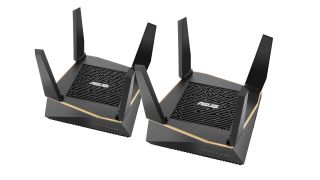 Asus has introduced a new mesh Wi-Fi system which is the first in the world to benefit from Wi-Fi 6 speeds.

Wi-Fi 6, previously known as 802.11ax, has already been used in routers, but not a mesh networking effort. It represents the next step on in wireless performance from Wi-Fi 5 (802.11ac, which most current routers run).

The new AiMesh AX6100 Wi-Fi System comprises of a pair of Asus RT-AX92U routers that, like any mesh networking system, are positioned strategically about your home to ensure Wi-Fi coverage throughout, and eliminate any wireless dead spots.

Asus notes that the AiMesh AX6100 comes with AiProtection Pro security built-in (along with parental controls), and supports theoretical Wi-Fi speeds of up to 6100Mbps (4804Mbps on the 5GHz band). It’s a tri-band offering, with one Wi-Fi band dedicated to connecting the router units themselves, and the other two bands completely reserved for the devices connected to the internet.

The beauty of tri-band is that a dual-band system needs to borrow some bandwidth from those two Wi-Fi bands to use for the mesh connection between the routers, so that’s bandwidth you’re not getting that could otherwise be used by your devices.

Asus further observes that the RT-AX92U routers are around 2.7 times faster than current-gen 802.11ac 4x4 models. Wi-Fi 6 also provides better network capacity, and improved performance in more crowded environments with lots of wireless devices, so there are plenty of benefits here.

That said, remember that not only does the router have to support Wi-Fi 6, but also the client device (for example, the Samsung Galaxy S10 is Wi-Fi 6 compatible). However, far more Wi-Fi 6 ready devices will be in the pipeline soon enough, no doubt, so you’ll be future-proofed for those.

Perhaps the other point to bear in mind here is that these Asus router units don’t look as unobtrusive as some mesh networking solutions, which are often plain white cylinders (or similar) designed to blend in with your home’s décor. So that might be a consideration from an aesthetic point of view.

At any rate, this is clearly a nippy system, and if you want to get a piece of the Wi-Fi 6 mesh networking action, a two-pack of devices will set you back £390 (around $500, AU$725), and they’ll be available to buy in June. As ever, cutting-edge tech isn’t cheap (Google WiFi is £229 for two units, in comparison, or cheaper if you can find a good deal).