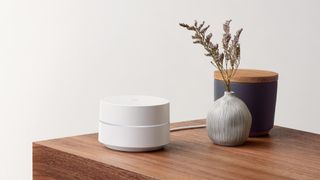 When the Google Wifi was released in 2017, it quickly became our favorite mesh router, thanks to is diminutive size, user-friendly setup and value for money compared to the rest of the competition.

And now it appears we're getting closer to the release of a follow-up, with new revelations from Chrome Unboxed indicating that a Google Wifi 2 is already on the production line, and could see its debut later this year.

Codenamed Mistral (meaning wind), the next-gen Google Wifi will use Qualcomm’s new QCS400 series SoCs (system-on-a-chip) as its main processor. That's an unusual choice for a router, as the QCS400s are primarily designed for use in smart speakers. The new Qualcomm SoC also supports Wi-Fi 6, the next-gen wireless technology formerly known as 802.11ax.

That means the Google Wifi 2 will be able to achieve higher peak bandwidth with better distribution across several devices, while also potentially being capable of voice input and audio playback.

It’s all in the name

While the arrival of the Google Wifi 2 is still speculation – there's also the possibility that we could see these same features included in a Google Home 2 smart speaker that doubles up as a mesh router – the codename Mistral was discovered in April 2019 by Kevin Tofel who, at the time, assumed the device was a new smart speaker or display.

However, Google has a history of naming its Wi-Fi products after types of winds – for example, ‘Storm’ for the OnHub routers produced in partnership with Asus and TP-Link, and ‘Gale’ for the first-gen Google Wifi – the first mesh system in the 'Made by Google' hardware range.

The eagle-eyed folk at Chrome Unboxed also unearthed a rather convincing hint in a code change update for Mistral that pretty much confirms it’s a mesh router and not a smart speaker. 9to5Google has also sleuthed out some conversations between Google devs referring to both Gale and Mistral in the same breath.

In any case, Chrome Unboxed has noticed that Mistral is already in the production validation test (PVT) phase, meaning we likely won’t have long to wait before we get a better look at this faster – and potentially smarter – Google Wifi mesh system.