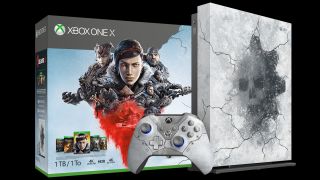 Microsoft has unveiled a series of new Gears of War 5 products, including a line of peripherals from Razer and Seagate, plus a special edition Xbox One X with a custom controller. Microsoft made the announcement on the Xbox Wire where we got some details on the branded gear.

Of the entire lineup, the product gamers will be most interested in is the special edition Xbox One X. It’s the first special edition version of the console since the Project Scorpio launch edition that was available at the console’s launch that will launch alongside the game on September 10, 2019.

Get the full Gears loadout

Of course if you want to really feel like your part of the Coalition, Microsoft has partnered up with Seagate and Razer to offer a number of Gears-themed peripherals too.

Last up, if you need more storage for your Xbox One X - and, given the console's limited 1TB hard drive, you do - there's a new $99 2TB Seagate Game Drive for Xbox Gears 5 Special Edition that has the same color scheme as the console, and if you need even more storage, Microsoft says there will also be a 5TB external drive available exclusively from GameStop for $149.