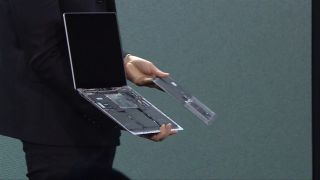 Out of all the exciting news to come out of Microsoft’s October 2019 Event, one of the most welcome announcements was that the Surface Laptop 3 and the Surface Pro X will both have removable SSDs – but it seems like they won’t be as easily upgraded as we’d first thought – and hoped.

Microsoft’s previous Surface devices have come under fire because they are very difficult to fix or upgrade, due to the company making the devices very hard to open up and remove components. It had initially appeared that Microsoft had taken those criticisms to heart by announcing that the Surface Laptop 3 and Surface Pro X will have removable SSDs – but a bit of small print on the devices pages makes us think that there’s a catch.

As spotted by Windows Central, the pre-order pages for the devices says that the drives are not “user removable,” and should instead be replaced by a “skilled technician.”

So, this could mean that anyone hoping to easily open up the devices and replace the hard drive themselves may be disappointed. It could mean you need to take it to a Microsoft Store or third party repair shop to replace the drives. Not only is that quite inconvenient, but it could also be costly if the stores charge for the work.

This news is definitely disappointing, though we’ll hold off getting too gloomy until we get our hands on both the new devices for review, when we can see for ourselves just how easy it is (or isn’t) to remove the SSDs.

Being able to swap out the drives easily by ourselves would definitely have been neat – it would have meant users could easily add a larger hard drive, or replace a broken one, easily and cheaply, without having to buy a whole new system.

However, even if you have to go to a “skilled technician”, it’s still a welcome step in the right direction from Microsoft.

You can also buy the Surface Laptop 3 with up to 1TB of storage, and up to 512GB on the Surface Pro X, which is plenty of space for most people.

The Surface Laptop 3 launches October 22, with the Surface Pro X following on November 5.