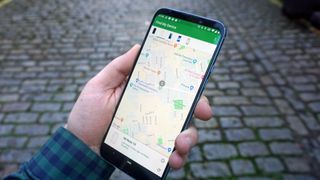 When I was walking down the bustling metropolitan battlefield of London’s Oxford Street after work one day, texting away on the Xiaomi Mi Note 10 I was meant to be testing, I watched as a passing cyclist grabbed the phone from my hand and sped off into the night.

By the time my brain twigged I’d been robbed, the bike bandit was much further down the road, and any hope of pursuit was gone. My handset had been pinched in broad daylight – or, at least, the never-ending light of London’s busiest street – and there was nothing I could do about it.

The story doesn’t end there, though, with me reordering a SIM card, hoping everything on my lost phone was backed up, and resigning myself to finding a new handset. No, thanks to a pinch of luck, some kind humans, and Google’s Find My Device app, the phone was back in my hands in two short days. Here’s how.

Initial attempts to reclaim my device

Some people’s first instinct after being robbed might be to contact the police – I was decidedly less optimistic, as I decided they’d have better things to do than chase a pedalling pilferer. (It's also pretty hard to phone the cops when your phone has just been stolen.)

Instead, I retreated to the nearest Wetherspoon – a UK chain of pubs, and a common abode for lost or weary souls – that was, co-incidentally where I was meant to be meeting some friends anyway.

I was lucky enough to be carrying another test phone, the Black Shark 2 Pro, and while this didn’t have a SIM card so was pretty useless out and about, the free Wi-Fi available at the Wetherspoon pub gave it a lease of life. I could download apps to message the people I was to meet, although WhatsApp was still out of action – annoyingly, it’s tethered to a phone number, and the handset with that contact information was presumably half a world away at this point.

I also downloaded a Google app I had used before – Find My Device. It lets you locate other devices signed into the same account as you, as well as set off an alarm on it, erase your information on the device, and leave a message for anyone who finds the device (useful if your handset is lost, not as much if it’s stolen, unless you want to leave pleading messages to the thief).

To my surprise, when I searched for the location of my missing Xiaomi phone, it was only 10 minutes walk from my position, roughly halfway between the point of the crime and my cosy pub. While the location circle was quite wide, I could clearly see it right by the Oxford Street Samsung Store, and it didn’t seem to be moving.

Could the cycling criminal have dumped the phone, realising the phone wasn’t available in the UK yet and was therefore potentially worthless? Or could he or she still be in the area, ready to snatch another smartphone from an unsuspecting victim’s hands? Since the location area was pretty wide, and the phone was potentially still with a criminal, I knew there wasn’t much chance I’d find it in the area. But I had to check.

Suffice to say, I couldn’t find the phone. I patrolled the street a few times, checked the outsides of shops to see if someone had picked it up and placed it on a nearby ledge. Nothing. Later I returned with a friend who called my phone, and I used Find My Device to set off the alarm, but we couldn’t hear or see it. The phone was lost.

This wasn’t the first time I had try to use Find My Device, and the previous time hadn’t been successful either. Some time prior I’d lost a handset in a foreign country, and despite the best efforts of Find My Device and a collection of colleagues calling it and helping me track it, the phone was never returned.

This sentiment has been echoed by others I’ve spoken to, both tech journalists and not, as not many people consider using, or even know about, Google’s Find My Device. But what happened next is enough reason to reconsider that.

The next morning, I’d given up hope of reclaiming the stolen phone – I’d ordered a new SIM card, downloaded all my lifestyle apps onto the Black Shark 2 Pro, and had sent messages round on social media announcing my temporary blackout while the new SIM came.

I logged onto Google Find My Device, ready to take the nuclear option and erase all my data on the Xiaomi phone. After all, I had personal data, contactless payment information and probably the best mushroom burger recipe ever saved on the handset – I couldn’t let this all fall into the wrong hands.

I was hesitant though, and instead of selecting ‘Erase Device’ I pressed ‘Secure Device’, which lets you lock the device, but also leave a message and phone number for whoever finds the phone. I knew this was a stretch, but if the phone was static because it had been dumped, perhaps someone else could find it? I left a short message and my mum’s phone number, more to make myself feel good, rather than out of any hope.

Then, a few hours later, I got a message from my mum. It was a confused message, and in hindsight, I probably should have let her know I left her phone number as my lock screen. The message was simply a screenshot, of a text conversation with an unsaved number, informing me that someone had found my phone and was getting in touch to return it.

As I later found out, my robber had seemingly chosen to wear trousers with small pockets that day, because as they sped off with their newfound loot, they put my phone in their pocket – and it had promptly fallen straight back out onto the pavement. My phone’s saviour picked it up and tried to return it, thinking it belonged to the cyclist, but hadn’t been able to catch up. Instead, they had returned it for safekeeping to their place of work – which is where Find My Device had been telling me it was all along.

When I decided to put my mum’s phone number as the contact number, the guardian angel saw it, sent a text off, and the rest is history.

Unfortunately, the drop from the robber’s pocket must have been a hard one, because the screen of the phone was almost unusable, and I was very impressed the person who found it could even see the phone number on it. Still, I managed to retrieve my SIM card, and got to enjoy the bragging rights of someone who retrieved a robbed possession.

The biggest gain, though, was knowledge of how useful Google’s Find My Device app actually is: thanks to its various tools, I could locate my phone, as well as leave a message on it that eventually got it back in my hands.

So if you, like me, have dismissed this app out of hand, for whatever reason, bear in mind it’s still worth giving it a chance if your phone is lost or stolen – you might just be able to reclaim what you thought was lost for good.