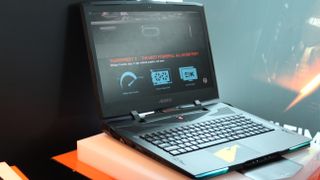 Gigabyte has confirmed the launch of two new high-end gaming laptops in its Aorus range at this year’s Computex convention, the X9 and X5 MD, as well as showing off the updated version of its X7 DT and X5 machines.

Gigabyte already boasts an impressive array of laptops, but its Aorus line is loaded with the latest in high-performance tech and gaming-oriented features to satisfy spec-hungry gamers.

While the X9 was shown off as a concept earlier this year at CES, we now know that this top-of-the-line gaming laptop will be available towards the end of the year, around October or November, in the US, UK, Australia, Germany, France and Taiwan.

The X9 features a 17-inch screen and Nvidia GeForce GTX 1070 SLI GPU, with the twin 1070 cards apparently capable of a 30% increase in performance over a single GTX 1080. Also notable is the X9's ability to squeeze a mechanical keyboard (complete with individual RGB illumination) into a relatively thin body – it slips in under 30mm (1.18 inches).

The body of the X9 also sports some distinctive designs when compared with its Aorus brethren. A new case design offers some sleek edges on the top of the lid, while the ventilation beneath the laptop (which is generously elevated by rubber feet) is in the shape of Aorus’ signature eagle.

The Aorus X5 MD bumps up the overclocked processor to Intel's latest seventh generation i7, and replaces the Nvidia GeForce GTX 1070 with a 1080 for boosted performance. The IPS display is also increased from 3K to 4K

The M5 XD features Intel’s latest Thunderbolt 3 interface which allows for up to 40Gbps transfers and also boasts the same X-Rite Pantone certified display that we have seen in the more creative-focused Aero series from Gigabyte.

Although we don't have any word on when the X5 MD will be available, we can apparently expect it to release in the US and UK, and possibly Australia. Keep an eye out for our hands-on review.

The latest iteration of the X7 DT (v7) keeps the previous models GTX 1080 GPU but brings with it a seventh gen overclocked Intel i7 CPU as well as Intel’s latest Thunderbolt 3 interface and the previously mentione X-Rite Pantone certified display that we have seen in the more creative-focused Aero series from Gigabyte.

The Aorus X7 DT  is expected to be available in the same regions as the X9, the US, UK, Australia, Germany, France and Taiwan, with the X7 DT arriving in these regions as early as July.