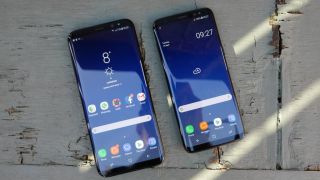 The unlocked Samsung Galaxy S8 or Galaxy S8 Plus is the best version of the top rated smartphone without carrier restrictions and now Amazon has it as a great price.

In our eyes, the Samsung Galaxy S8 is a great phone, with some of the best design elements of an Android phone to date, great performance, and a killer camera in keeping with Samsung’s past flagship phones.

Samsung currently offers the unlocked Galaxy S8 with 64GB on its own website for $724, so Amazon’s deal beats even Samsung’s in-house price.

The same story applies to the Samsung Galaxy S8+, which is like a bigger, better Samsung Galaxy S8 without being too large thanks to Samsung’s minimal bezels. Samsung lists the 64GB Unlocked Galaxy S8+ at $829, and once again Amazon’s deal beats that by a substantial margin.

With the Galaxy S8 and S8+ plus, Samsung introduced what it calls the “Infinity Screen,” a curved display going to the far left and right edges of the phone and occupying the almost the entire front of the phone. There’s only a slim bezel at the top and bottom. The phones also feature biometric unlocking methods, and a new virtual assistant called Bixby.

The freedom of taking a phone to any carrier, even to other countries, offers mobile users a great way to choose whatever mobile plan best fits their needs.  With the Galaxy S8 and S8+ so heavily discounted, users now have a way to get one of the best unlocked phones and pair it with a cheap plan, saving money every step of the way.