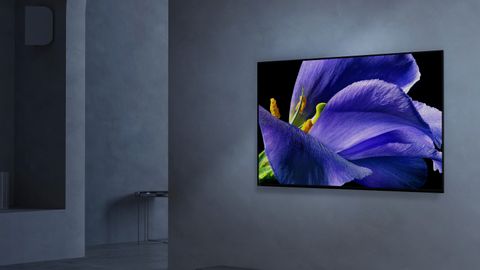 The Sony A9G/AG9 is worthy of any AV lover's entertainment center thanks to its best-in-class upscaling, 4K picture processing and respectable gaming performance. But the lack of HDR10+ support will make enthusiasts wary.

The Sony A9G/AG9 Master Series OLED is the new flagship of Sony’s TV fleet. It embraces a characteristically minimalist design that disguises a host of cutting-edge features like Dolby Vision and Dolby Atmos support, plus Netflix Calibrated Mode (of interest to many), and IMAX Enhanced certification (of interest to few).

Whichever side of the pond you buy it, though, this model sits firmly at the higher-end of the OLED market and is well-worth the exorbitant sticker price.

The flagship Master Series TV’s design can be described as confidently understated: Adopting a more conventional stance then the overt lean-back pose of previous Sony range-toppers, the panel is held in an unobtrusive frame which sits virtually flat to the central pedestal stand.

That means there’s no room to put a soundbar in front, but that shouldn’t be an issue, as this flatscreen features Sony’s Acoustic Surface Audio+ technology. With no conventional down-facing drivers, vibrating actuators on the panel are used to produce audio and, while it's a bit of a downgrade from the A9F/AF9, still creates a dynamic and immersive sound.

Connectivity options are comprised of four 4K HDMI inputs, all of which will support 2160p up to 60Hz at 4:2:0, 10-bit 4:4:4 and 4:2:2, plus HDCP 2.3. There’s an AV minijack, headphone socket, optical digital audio output, a trio of USBs (one designated for HDD recording) plus Ethernet, Wi-Fi and Bluetooth.

Users can choose from terrestrial or satellite tuners - but don't expect support for Freeview Play either way.

The central stand is ideal for regular AV furniture and flat pack TV benches. The set can also be wall-mounted with an optional swivel bracket; Sony sells the SU-WL850 for the job. This allows the panel to sit just 50mm from a wall; if you’re going to do this, make sure you think about the power plug, which may well protrude further if placed behind the set. Of course, it’s compatible with regular VESA mounts too.

Last but not least, the TV comes with a single remote control. It’s a rather nice wand which has a smart aluminium face, dedicated buttons for Netflix and Google Play, and an integrated microphone.

Design TL;DR: The A9G/AG9 exudes effortless cool, with its minimal bezel and wraparound frame. Connectivity is extremely good, with a quartet of full-spec 4K HDMI inputs.

We’ve struggled to love the Android TV OS in the past, but its latest Oreo iteration is a tasty step in the right direction: The menu structure has been simplified, and Sony has added its own Quick Setting overlay to simplify access to elements like picture modes, not to mention the addition of Amazon Prime Video which hasn't been on Android ever since a feud between Google and Amazon erupted two years ago.

Not only does it use Google's TV OS, but it supports Chromecast Built-in as well. The screen can also be used with Google Home and Amazon Alexa devices, as well as Sony’s own LF-S50G and SRS-XB501G smart speakers. There’s support planned for Apple AirPlay 2 and HomeKit, but they didn't arrive in time for us to test them out.

Smart TL;DR: Android Oreo is shaping up to be a solid, versatile smart platform, bolstered by Chromecast Built-in. All the key streaming services are onboard, and you can use voice control too.

There’s no need for copious image tweaks to get this TV to shine: Straight from the box, the A9G/AG9 looks remarkable with HD/SDR content.

That said, it's amazing how crisp and colour-rich HD/SDR images look, with oodles of contrast. There’s a clear synergy between picture processor and panel. Object Based HDR Remastering with Dynamic Contrast Enhancement offers a well-judged boost, without ever seeming over-cranked.

Image presets comprise Vivid, Standard, Cinema, Game, Custom, Graphics and Photo - each of which have their advantages and disadvantages. For everyday content viewed in rooms with typical ambient light levels, Standard proves the best option. The Custom image has been tuned to match Sony’s Pro OLED mastering monitor, the BVM-X300, and is extremely effective in full dark room conditions.Vivid is also worth a watch, particularly with animation (don’t lecture us on naturalism, have you ever seen a Minion in real life?).

The set’s gaming performance can also be considered very good. This is one area where the brand has lagged (see what we did there) behind rivals, but on the A9G/AG9, as with the earlier A9F/AF9, it’s perfectly acceptable. Using the dedicated Game mode, we recorded an input lag of 26.5ms, fast enough for a decent FPS TV gaming experience.

HD/SDR Performance TL;DR: Sony continues to do an exceptional job with regular HD/SDR content. Object-based remastering ensures even daytime TV benefits from the full potential of this OLED panel.

As you'd expect from an OLED, the A9G/AG9 obviously goes perfectly black, but shadow detail isn’t sold down the river either.

One of the characteristics of Sony’s image processing silicon is that each implementation is tailored to exactly match the characteristics of any partnered panel; this is a boon when it comes to dynamic tone mapping for HDR, and probably explains why HDR handling here looks so effortless. Gradations are smooth, detail high and bit-noise is only notable by its absence. We noted no banding issues with UHD content either. This is 4K UHD as it’s meant to be seen.

We measured peak HDR brightness in Standard mode at around 750 cd/m2 (aka nits) with a standard 10% HDR measurement window. However, this doesn’t tell the whole picture. The panel can peak higher than that with real world HDR highlights such as glowing lamps and glinting reflections, fireworks and visual FX. This is evidenced by a peak HDR performance closer to 900 nits when the measurement window is reduced to a 5% window.

It’s worth noting that you won’t see the panel at its best if you opt to view in Sony’s studio-styled Custom mode. Here our sample didn’t get past 650 nits.

Dolby Vision Dark generally undersells the virtues of the AG9. Eighties wrestling drama Glow (Netflix Dolby Vision) looks downright dingy (at least more than intended), with near black detail getting slammed. The image gains a reprieve when you switch to Dolby Vision Bright (something of a misnomer, because it’s not abundantly illuminating).

The Netflix Calibrated mode does an impressive job with Netflix original content. The Dark Crystal: Age of Resistance (Netflix) is a sumptuous visual feast with the preset engaged. The colour depth and detail in the grade is extraordinary, and this Sony does a stunning job showcasing both the lush hues and sophisticated lighting techniques used throughout the show.

Sony’s 4K X-Reality PRO image enhancement brings extra subjective detail and depth to both HD and UHD images. It generally works well, highlighting subtle definition in shadowed areas and textures, although it can give grain a boost too. Generally though, we preferred it on rather than off.

Motion handling is fine, with caveats. The brand’s Motionflow XR processor is available in Auto and Custom modes. Switched on, it’s a boon for sports and fast moving action. However, it can result in unwanted image artefacts with film content. For movies, we’ll turn it off and take the judder.

4K/HDR Performance TL;DR: Sony continues to find ways to wring bonus detail and contrast from even the best of sources. If you want a studio style viewing experience, its Custom setting is remarkably authentic, while Standard ensures crisp vibrant images in rooms with high ambient light.

Sony has made some changes to its Acoustic Surface Audio+ system here, compared to the version we heard on the A9F/AF9. And in some ways, it’s a downgrade.

The A9G/AG9 is a two-channel implementation, as opposed to the 3.2 system on its predecessor, and there’s also a redesigned encasement for the redesigned twin woofers on the rear.

The good news is the audio remains full-bodied and exciting. There’s definite stereophonic image placement, and a real sense of dynamics. If you want to be picky, the soundstage isn’t as wide as you might get from a separate soundbar, but dialogue is locked perfectly to onscreen action.

Other panels to ponder...

There’s no shortage of choice when it comes to OLED champions, and picking between rival brands can ultimately boil down to small preferences.

One obvious rival is the LG E9 OLED. It’s a fabulous performer, and although not as accomplished with HDR/SDR content, it has a very similar level of HDR performance. It’s Dolby Vision compatible too, and similarly averse to HDR10+.

But, perhaps the biggest challenger is the Panasonic TX-65GZ1000. It's significantly cheaper than the Sony A9G/AG9, yet offers superior HDR support, with both Dolby Vision and HDR10+ dynamic metadata support. It also has a strong connected platform, and boasts sensational movie-style image processing.

With the AG9, Sony has honed an almost irresistible OLED champion. This is a screen that looks premium, and has a spec on the right side of righteous. The Android platform is easy to live with, that vibrating sound system entertaining and picture quality top notch.

Offering Dolby Vision is a welcome refinement, but the caveat is a lack of support for HDR10+. That said, HDR peak brightness is high, so the need to aggressively tone map is reduced. Moreover, it does a fabulous job up-scaling HD/SDR. Undoubtedly expensive but, all things considered, this glass is class.