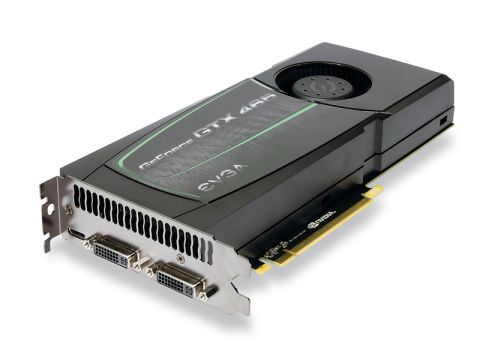 At the beginning there was the word and the word was Fermi, and Jen-Hsun saw that it was good. Unfortunately he also saw that yields for the good Fermi chip weren't too hot, and lo, the GTX 480 was born with a slightly sliced GPU.

Like the GTX 470 before it this is a card specifically designed to go after a competing AMD card head-to-head. With the GTX 470 it was priced up against the HD 5870, and for the most part suffered by comparison once AMD sorted its drivers out.

The GTX 465 then is aimed squarely at HD 5850's territory, and it's going for the jugular.

At its heart is the same huge 529mm2 GF100 GPU, albeit an even more heavily cut-down version than that in the GTX 470. The knife wielded by Nvidia to hack the GTX 470 into a more cost-effective Fermi card made some smart cuts to the expensive hardware.

You lost only a single streaming processor, which meant you only lost 32 processing cores. The memory bus was cut down too, from 384-bit to 320-bit for its 1,280MB of GDDR5. All this meant that while it was significantly slower than its big brother, the GTX 480, it was still able to keep pace with AMD's HD 5870, even if it was lagging slightly behind in most metrics.

With the GTX 465, Nvidia has been a little more heavy-handed with its karate chop action. A further three streaming processors have been cut out of the GF100 GPU, which adds up to a loss of 96 of Nvidia's CUDA cores, and again the memory bus has been slashed, this time to 256-bit for the 1GB of GDDR5 sitting on the new PCB.

Clockspeeds across the board have been slashed, too. Compared with the GTX 480 this is a massive drop in architectural goodness, as well as a fair drop in performance. However, when you compare that with the HD 5850, spec-wise things aren't looking too bad.

The HD 5850 is running on a 256-bit memory bus with 1GB of GDDR5 too and houses the same 32 ROPs that now sit in the cut-down GPU powering the GTX 465. Of course, the relative architectures of the two graphics cards are very different, and so are the clockspeeds, so in specification terms it's still a bit of an apples and oranges comparison.

Much like the GTX 470 before it, the stock GTX 465 struggles in most performance metrics to keep the pace with the competing HD 5850 card. At the lower end of the resolution spectrum they're just about level, but as you aim for the high end the performance of the GTX 465 drops off in comparison. They're both running the same 1GB graphics memory and a 256-bit memory bus, but the HD 5850's higher clockspeeds means that it wins in the price-point battle.

Which is surely one of the reasons EVGA has come out rather quickly with the Superclocked edition of its GTX 465 card.

This isn't even the top end of its range, with the Super Superclocked and FTW editions (I'm not making this up) besting this version. Essentially this edition contains a GPU specially selected for the Superclocked treatement.

These GPUs are more capable than most to handle a decent overclock. The really interesting thing, though, is the amount of headroom this card has in terms of overclocking ability.

By simply upping the core voltage to 1v using the EVGA Precision overclocking tool, we were able to significantly up the clockspeeds across the board, even on the memory side.

The HD 5850, then, doesn't stand a chance against a carefully overclocked GTX 465. Even at the high end of resolutions, where previously it had been relatively weak, it now stands comfortably above the competing cards.

In fact with the clockspeed and voltage tweaks, the Superclocked GTX 465 is actually rather close to the GTX 470 in performance terms. The card only drops a few frames per second on even the most demanding of titles at the top res of 2,560 x 1,600.

This overclock also has the added benefit of actually making the GTX 465 fairly competitive with AMD's top single-GPU card, the stock HD 5870. In fact in the tessellation-heavy Heaven 2.0 benchmark the GTX 465 bests the HD 5870 even without the hefty overclock. In most benchmarks, though, the HD 5870 still holds firm, keeping the newer Fermi-based cards at bay.

All is not as rosy as it first seems, though, and inevitably that comes directly from the pricing of this new card. The stock GTX 465 comes in around the £230 mark, making it directly competitive with AMD's HD 5850, and noticeably cheaper than the GTX 470, even with the price-drop bringing it down under the £300 mark.

But that's the stock card: this bin-picked GTX 465 comes in at £270, and that makes it uncomfortably close to the GTX 470. Then we inevitably come to the GTX 460. This brand new card with a brand new Fermi GPU has effectively retired the GTX 465 before it's had a chance to do anything.

The new cards are priced significantly lower than the GTX 465 and the 1GB version comprehensively bests it in practically all performance metrics out of the box. Even when they're both given some extra overclocking lovin' too.

Too much, too close

Unfortunately the £40 premium for this Superclocked edition over the standard version makes it way too close in price to the superior GTX 470. And the new GTX 460 coming in at the £200 mark for a sometimes faster card makes it a no-brainer.

EVGA must be cursing the recent drop in price of the GTX 470 (especially considering its Superclocked edition of that card is coming in at over £340, giving it a £70 premium). Because without it this sizzling little card would have garnered the plaudits it deserves.

And with Nvidia effectively retiring this spin of the first Fermi GPU a month after its inception, there are going to be a lot of unsold GTX 465s heading back to Nvidia. The GTX 465 is a stop-gap card and its time has passed already.

It's a shame as it overclocks brilliantly, even with the stock cooling solution, and manages to keep pace with more advanced cards. Unfortunately it's just that little bit too expensive compared to better, cheaper offerings to really be a card that I could in all good conscience recommend anyone picks up.