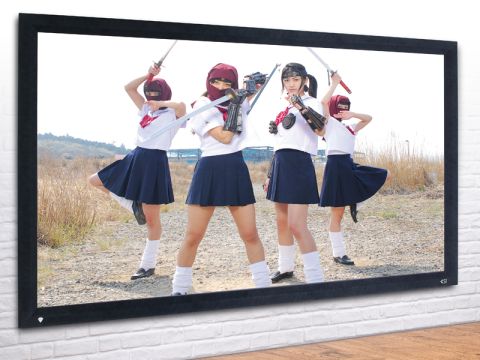 We put lots of projectors through their paces, but we don't often cover the 'other half' of the projection story – screens. And for good reason: screens are generally – in any serious cinema room – picked very carefully from a vast series of different screen material/size/mounting options to best suit the specific demands of both your projector and your room setup. In other words, individual screens can be too specific in their focus to justify extensive coverage.

The Black Diamond II from US firm Screen Innovations, however, is different. This screen's properties give it the potential to transform – at a surprisingly low cost – almost any projector set up. In fact, the Diamond can even become a more affordable alternative to a giant plasma or LCD screen, such as Panasonic's £50K 103in TH-103PF9.

The single biggest reason for this is that the Diamond claims it can increase projector contrast by a whopping 300 per cent – or more. Clearly, this can result in either huge leaps in brightness and punch with the images reproduced by any projector, or an image bright enough to be enjoyable in far more ambient light than is normally acceptable.

You might expect a screen with such prodigious reflective properties to be an entirely rigid affair – think again. The Diamond uses dark grey/black 'fabric', which enables it to ship as a roll, and while at the time of writing it's only available in a fixed-frame setting, it will be fitted to motorised/electronic screen mechanisms before the year's out.

At this point, you're probably wondering how Screen Innovations has conjured up a screen with such unusual properties. But, with patents still pending, if I told you how it was done, I'd have to kill you.

The most I can say without the lawyers knocking is that it's a non-polarising system that uses a formulation of seven optical laminations, including an advanced reflective layer – a structure which helps it deliver exceptional control of its light dispersion pattern.

In other words, while light bounces back from typical projector screens in a wide, scattershot pattern, lighting up the ceilings and walls of a lightly decorated room and thus reducing the quality of the image on the screen, the Diamond focuses the light straight back towards the projector/you.

Other things this high-contrast projection screen prides itself on include compatibility with 4K x 2K (or higher!) and Full HD 3D signals, and exceptional brightness uniformity.

The screen can extend to a maximum 16:9 screen size of 113in diagonally (98.5in horizontally) without a seam, and comes in two gain versions: a 1.4 high brightness version, and the 0.8 version I tested, for people with darker rooms who love black level response.

The second I fired pictures from a SIM2 C3X Lumis Uno projector at the Diamond, my eyes widened, my jaw slackened and my speech became little more than grunts and squeaks. The screen didn't just deliver an incremental improvement on the experience of watching films in my test room; it was truly transformative.

The first thing I noticed was the lack of 'rogue' light bouncing around. My test room has matte white walls and ceiling, and so with my usual screen – a solid Vutec – powerful PJs like the SIM2 C3X Lumis Uno flood the room with dispersed light.

With the Diamond, though, my usual reflection problems were almost completely removed, thanks to the screen's remarkably focused reflectivity. This means dark parts of the picture are much deeper and more natural, colours look richer, and the image as a whole simply explodes off the screen.

I was also struck by how exceptionally crisp and detailed pictures looked, the brightness and purity of whites despite the dark screen colour, and by how I couldn't see any distracting signs of the texture/fabric of the screen. Next, while the Diamond's impact on brightness and contrast is profound, it delivers its extra impact without the slightly 'shiny', almost sparkly, finish often witnessed with high-gain screens.

Satisfied with its prowess in a dark room, I turned up my dimmer switches – and was equally amazed by how well the screen's pictures hold up even when the room is flooded with ambient light.

Before you rush off to buy a Black Diamond II, though, there are a few issues to consider. Firstly, regarding the screen's potential as a giant plasma replacement in bright rooms, the punch it delivers in such circumstances inevitably depends on the brightness of your projector.

Please note, too, that while the screen handles general ambient light brilliantly, it's – understandably – unusually reflective of light sources that sit directly opposite it.

Another important point is that the Black Diamond II has a rather limited viewing angle. Look at the screen from around 40-45 degrees to the side or 20 degrees or so above or below it, and the image's brightness diminishes rapidly, as well as losing uniformity. This is reduced on the 1.4 gain version, however. People wanting to mount a speaker behind their screen, meanwhile, should note that the screen isn't acoustically transparent.

Finally, I felt that the Black Diamond slightly exaggerated cheap single-chip DLP projectors' rainbow effect issues – though the improvements it brings elsewhere still easily win out unless you're really exceptionally sensitive to rainbowing.

The bottom line here, though, is that if you want to set up a home cinema room but are hampered by ambient light, or you just want to drastically improve your projector's performance in a typical home cinema environment, then the logic-defying Black Diamond II must be seen to be believed.