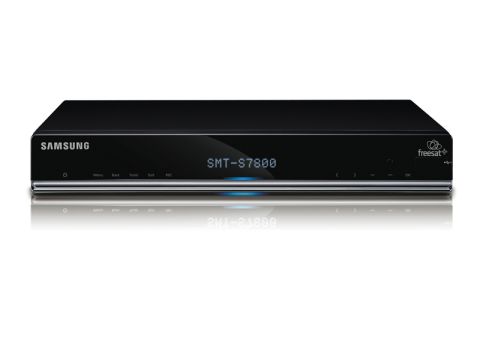 Samsung have joined the Freesat party with their first Freesat PVR

Samsung has thrown its hat in the Freesat receiver ring with the SMT-S7800 500GB PVR.

The new Freesat G2 specification will bring, at some unspecified time, further integration of broadcast and broadband delivered programming.

Samsung sees no need for delay here in delivering a twin-tuner PVR with a sprinkling of its Smart TV magic, saying that when G2 boxes become commercially available it will issue a software update.

First impressions of the SMT-S7800 are that it looks as attractive as Humax's benchmark-setting Foxsat-HDR. The spec looks an equal match too.

Design-wise, the front panel is heavily populated with 11 touch-operated controls, a 12-character LED display, and a USB. Despite the hive of activity, the fascia exudes an air of confidence and quality.

A peek round the back past a side-mounted CI+ slot (useful if Freesat ever offers pay-TV) reveals a pair of LNB inputs (but no loopthrough), an Ethernet input and another USB, which can be used with an optional Wi-Fi adapter. Outputs include an optical S/PDIF and an HDMI, which can pump out 1080p upscaled images should you have no faith in your screen's built-in scaler.

Under the hood is a 500GB hard disc, enough for 120 hours of HD recording or 250 in standard definition. You can also copy media from a USB drive.

The full-size remote control doesn't match the box's attractive looks but it feels good in the hand and is sensibly laid out with decent-sized and nicely responsive buttons.

The PVR functionality is strictly Freesat-only with no option for recording other channels/satellites, but at least this means setting it up is child's play.

Choose the language, screen ratio, display format and resolution, enter your postcode and after a visual display of the signal strength, you start scanning.

The GUI is a visual delight – the fonts and graphics are reassuringly up to date, and if you press the main Menu button which provides access to Guide, Channel, Library, Media, Samsung WebTV and the Settings sub-menus each icon bobs up and down when highlighted and does a nifty 360° spin when selected. A separate mode (barely mentioned in the manual) caters for non-Freesat channels.

You can scroll through the various satellites and scan manually, changing the frequency, polarity, symbol rate, and broadcasting format (DVB-S or DVB-S2 for SD and HD). There's no DiSEqC switch or motor control.

In the setting menu there are options to select the sound output for both HDMI and the S/PDIF. The default setting is PCM but the box can output Dolby Digital and Dolby Digital Plus if it receives it or DTS if it detects HE AAC. Audio description and audio delay are also to hand.

The three-quarter screen EPG is standard Freesat stuff, but well executed and can display 13 genre options including all channels and favourites. Eight channels are shown over a one, two or four-hour period with info about HD alternatives displayed and subtitles and series recording supported.

BBC iPlayer (non-HD, sadly) and the forthcoming ITV Player are listed as channels 901 and 903 respectively, rather than falling into a separate portal.

Pressing OK on the remote brings up a list of channels overlaid on the left side of the screen. From here you can scroll left and right through the genres or up and down through the channels and create and edit Favourite lists. It's all slick and intuitive. Non-Freesat channels can be picked from a separate list and also viewed in an EPG.

For timeshifting the box has a maximum 120-minute cache with the usual pause, rewind and fast-forward features up to 64x normal speed. Slo-mo options include 1/2, 1/4, 1/8 and 1/25 normal and dedicated keys on the remote let you create bookmarks, leap back 15 seconds or shoot forward by 60 seconds instantly.

The receiver also lets you schedule a recording from the information banner, the TV guide or the Search menu. A red icon appears as a reminder in the info banner and channel list. Oddly, there is no padding or manual timer option.

Smart TV sadly only consists of YouTube, albeit an impressive implementation. Multimedia playback (from USB attached, internal drives or DLNA-networked storage) is good where it works but file compatibility is severely limited, and the only DLNA-product ours would recognise was a Windows PC.

Aside from a bug that made five additional one-second recordings at the start of each scheduled recording, the SMT-7800 performs superbly.

Some SD channels are rather too soft but on HD channels the quality of live, timeshifted and scheduled broadcasts is excellent.

Humax should be flattered – the Samsung SMT- 7800 is uncannily similar in terms of its spec, design, price and performance. There are a few slight differences such as flexible satellite tuning and recording trimming on the Humax, plus the Foxsat-HDR is available as a much more aff ordable 320GB option.

What should be the killer difference in the SMT-7800's favour is its internet TV selection and networking, but the sole presence of YouTube almost beggars belief, while the poor DLNA implementation is another example of unfulfilled potential.

Absent features aside, the SMT-7800 delivers where it counts as a Freesat PVR. Setting up and using the box is a nonsense-free experience and the contemporary-looking menu system inspires confidence. And there are nice touches, such as quick messages about background recordings that make it a real pleasure to use.