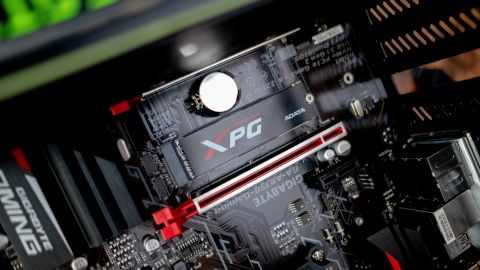 The Adata XPG SX8200 is one of the best SSDs when it comes to sheer price for performance – you will not be able to find a better SSD at this price point.

For the longest time picking up a fast NVMe solid-state drive with a good amount of storage required dropping a decent wad of cash. And, while the prices of the best SSDs have been falling over the last couple of years, finding a drive that’s capacious and speedy while still being affordable is a rare thing.

The Adata XPG SX8200, however, tears all of those conventions down – delivering respectable performance that can go toe-to-toe with Samsung and WD’s best SSDs with a much more approachable price tag.

With prices like this you’d expect the Adata XPG SX8200 to perform similarly to budget SSDs, but the performance puts it in competition with the WD Black NVMe and Samsung 970 EVO.

However, the WD Black and Samsung 970 EVO are up to $70 more expensive for the top-end models, and the difference in performance is relatively minor too.  This is especially true for gaming, which Adata’s marketing is targeted at anyways.

The tech behind the XPG SX8200 won’t exactly blow your mind, but it still gets the job done. It uses the Silicon Motion SM2262 controller paired with 2nd Generation 64-layer 3D NAND TLC flash. This lets the drive deliver fantastic performance, capacity and power efficiency while keeping the price low. This is the same technology behind the Intel 760P, but because of the XPG SX8200’s increased SLC caching, you’ll get better performance – at a much lower price.

It’s through this technology that Adata is able to provide a stellar random read speed of 403 MB/s, which means that for most everyday users, this is going to be one of the fastest SSDs you can buy today. You should be able to load files and programs in the blink of an eye.

Adata claims that the XPG SX8200 can reach speeds up to 3,200 MB/s read and 1,700 write and our tests weren’t really that far off from those numbers. What’s really impressive, however is the fact that with its low asking price, it’s able to provide random read and write speeds that give Intel Optane drives a run for their money.

This translates into raw real world performance. When we tested out this drive by transferring a 10GB file, the results absolutely blew us away – it completed the task in 7.1 seconds – faster than any SSD we’ve tested over the last year. However, when we initiated the same benchmark with a 10GB folder instead, the results were a little different – delivering a middle-of-the-road speed of 19.45 seconds. This isn’t slow by any means, but it isn’t ahead of the pack, either.

The performance of the Adata XPG SX8200 is awe-inspiring. We went in expecting average marks all around, but the Adata XPG tested way above its weight class.

The Adata XPG SX8200 is frankly one of the best SSDs we’ve ever tested when taking all aspects of the drive into account. Sure, you’ll get faster performance if you spend more money, but that’s pretty much always the case.

Adata’s achievement here is that it was able to shove all of this high-end performance into a drive that should be attainable for pretty much everyone. With more SSDs like this, the days of fast and large NVMe drives being prohibitively expensive may be ending sooner than we thought.