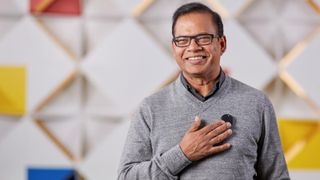 Google employees have a real love for Star Trek, so much so they ended up building a voice search device inspired by the sic-fi franchise, but it's never left Google's labs.

Speaking to Time, Google senior vice president Amit Singhal explained the little wearable is fashioned after the pin and badge communicator worn by Star Trek's Starfleet to speak to each other and the ship.

Google's prototype, however, is made only for voice searches.

You only need to tap the badge to activate it, and with it connected to your smartphone via Bluetooth, the answers are spoken out loud through a built-in speaker, Singhal revealed to the publication.

"You just ask it anything and it works. That's why we were like, 'Let's go prototype that and see how it feels.'"

Unfortunately, the little wearable never left the prototype stage, though that isn't surprising.

As cool as the Star Trek-type wearable is, Android and Windows phones, as well as iPhones, and now even smartwatches offer the same voice search functions through the Google app, Cortana and Siri with just a press of the button.