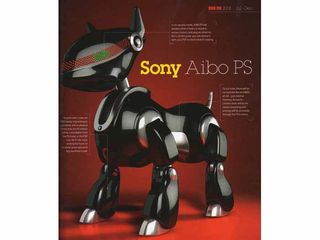 It's been a month since the chancers over at Stuff magazine teased us with a mock-up of what a next-generation Aibo might look like, but sadly we can confirm it is indeed a total invention.

Admittedly, no one ever said the 'Aibo PS' pooch was real but it received such widespread media coverage, we just had to follow it up this week once the good people of Sony Japan returned to work after the holidays.

From the horse's mouth

Like the trusty newshounds we are, we picked up the phone and spoke to Koji Kurata of Sony Japan's Electronics Department about the possibility of a comeback for the retired mutt.

Sadly for us, the fairytale ended there, as Kurata-san made very clear: "Sony terminated Aibo production at the end of FY2005 [and we] currently have no plans to revive this business in the future."

So, it really is game over for Aibo but with Sony bouncing back from a bad few years, something even better emerging from the Shinagawa offices this year seems like a safe bet.