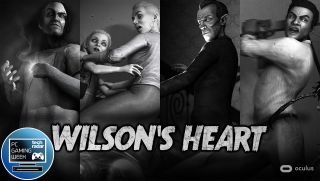 Horror isn’t that hard to accomplish in a virtual reality setting, frankly. Just look at the spate of jump scare generators on the VR game stores. However, Wilson’s Heart for Oculus Rift brings depth to horror in VR both literally and figuratively.

Developed by Austin, Texas-based Twisted Pixel Games, Wilson’s Heart is an 8 to 10-hour VR experience that will leave you (i.e. this very editor) shaking, shuddering and thinking, “what just happened?”

The Oculus Touch-controlled game sets players inside the body of Robert Wilson, a middle-aged man who has just awoken strapped to a vertical operating table inside a ruined medical or psychiatric facility. Upon freeing yourself from the table’s bindings, it’s up to you to determine why you’re here and the best exit.

Twisted Pixel, known for heavily-stylized, cartoonish games like Splosion Man, is a master of dramatic character expression and world building. Unlike its previous playful worlds, though, the studio uses the same artistry to great effect in creating a world that’s just enough out of touch with reality so as to feel surreal within the Rift headset, but grounded enough that it doesn’t feel wholly unfamiliar.

Frankly, it’s like stepping into the black-and-white monster movies of the 1930s or the first run of The Twilight Zone, both cited sources of inspiration for Twisted Pixel CCO and creative director Josh Bear.

“We’ve never seen many games that pay homage to that [era],” Bear says. “We were concerned at first that all black-and-white in a VR world would take people out of it. But, we haven’t heard anyone complain.”

“It also gives us more usage of contrast and shadows that get more lost in a full color world,” CEO Bill Muehl adds.

It’s true, in playing Wilson’s Heart for a few hours so far, the overarching elements of light and dark in the game’s narrative and mechanics marry perfectly with the monochromatic aesthetic. Light is a rare resource in the asylum you’re stuck in and something the creatures of darkness – regardless of whether they’re in your head – are averse to.

However, escaping those threats and navigating the dilapidated facility you’re apparently stuck inside isn’t quite as turnkey as you might expect, having joysticks under your thumbs. Twisted Pixel decided to restrict player movement and interaction with the world of Wilson’s Heart to specific points within the game world.

This is resolved by a sort-of teleportation or point-based system, in which the player looks at a spot with a silhouette of the protagonist in all-white (new spot) or all-black (been there) and is transported there via a joystick press. For a game in which creatures made of darkness are after your soul, or so you believe, it seems a bit incongruous to the circumstances, but Twisted Pixel has a point.

“We wanted as many people to enjoy the game as possible because of motion sickness,” Muehl reveals. “We experimented with [joystick-based full control] a bit early on, but it kept running this fine line of there being a lot of people not able to do it.”

That said, the “teleportation” system also allowed the developers to rely more on environmental puzzles and clues – not to mention set piece story moments and scares – to push the exploration and narrative forward with players all but forced to investigate each room.

A threefold effect is that having to explore every dark crevice of every room has players, like this editor, having to psych themselves up before every environmental interaction. The spot-on positional audio design plays up these anxieties to great effect – expect lots of fake outs.

Just about every one of the predetermined points within Wilson’s Heart has something integral to the next task or clues in regards to what the hell is going on inside this largely abandoned home. If not, you’ll find custom-made comic books made to look from the era, their pages – which you can flip through – chock full of easter eggs and other contextual clues to Wilson’s world.

Not being able to immediately run from or respond to a situation in Wilson’s Heart helps to play up the sense of drama and helplessness as the protagonist. There are times when you are going to be facing one direction, only to be immediately met by a threat in the other should you turn around (and then promptly throw your headset off out of fear – we’re sort of kidding).

But, at least you still have a heart – wait

Not far into the game, it’s revealed to you – without dishing too big a spoiler – that your body was augmented in a strange way before you woke up. A strange way that allows you to have supernatural interactions with the world, but also drives your character to find answers.

It’s these powers that Wilson will develop over time, coupled with some heavy Lovecraftian elements of eldritch horror. Over time, players will question just how much of what they’re seeing in the game is actually just inside their – well, Wilson’s – head.

Further to that point, Twisted Pixel went so far as to have Wilson, the player character who’s head you essentially inhabit in putting on the Rift headset, fully voiced by Peter Weller. You know, RoboCop?!

Fully-voiced video game protagonists are common these days, but it’s different when the player is this closely connected to the protagonist “physically”, and Twisted Pixel knows this.

“It was kind of an interesting experiment, to be honest,” Bear admits. “In order for the narrative to work, you have to be this older guy. And for the characters to interact with you in the way that we want them to, especially with the cast that we have, we’re going to make you someone else.”

It’s this kind of play on the themes of perception and consciousness that makes Wilson’s Heart interesting and provocative beyond the jump scares, providing a genuinely terrifying and unsettling thriller experience. You’re meant to question the nature of your, Wilson’s, presence in this story and what is actually going on, something Wilson seems to believe he already has figured out. But has he?

Something tells us you’re going to be asking that question right up until the last moment of Wilson’s Heart, and perhaps even after removing the headset. For those looking for a new scare with a whole lot of substance, Wilson’s Heart is available now on Oculus Rift for $39.99 – Touch controllers required.

Welcome to TechRadar's 3rd annual PC Gaming Week, celebrating the almighty gaming PC with in-depth interviews, previews, reviews and features all about one of the TechRadar team’s favorite pastimes. Missed a day? Check out our constantly updated hub article for all of the coverage in one place.