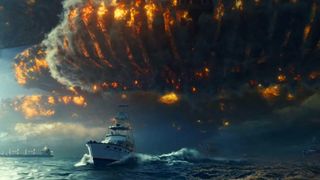 Set to arrive 20 years after the release of its predecessor, the marketing machine for Independence Day: Resurgence has kicked off with an impressively moody trailer which sees (almost) everyone from the original return, with some new faces also along for the ride.

After the globally-devastating events of the original Independence Day, the world is a very different place – humanity has incorporated alien technology into its defense systems (under the watchful eye of Jeff Goldblum), Bill Pullman has grown a great big bushy beard, Will Smith has seemingly evaporated, and there are presumably no landmarks left to destroy.

Unfortunately, such colossal changes to Earth's dynamics have failed to scare off the alien invaders that attempted to conquer us last time, and they've returned with a bigger, badder force just itching to wipe humanity out for good.

Joke's on them, though, because this time the original crew (which also includes Judd Hirsch and Vivica A. Fox) are joined by Liam Hemsworth, Maika Monroe (replacing Mae Whitman as Bill Pullman's daughter), Angelababy, Joey King, William Fichtner and Sela Ward as the new President.

Will Independence Day: Resurgence hit the same nostalgic sweet spot that carried Jurassic World all the way to becoming the 3rd highest grossing movie in cinema history? Check out the trailer below and start your prognosticating!