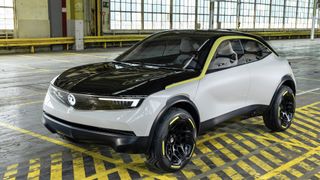 Is it possible to have too much of a good thing? When it comes to tech in our cars then Mark Adams, head of design at Opel and Vauxhall seems to think so. TechRadar met up with him recently in a compact and bijou studio in North London.

The main focus was to take a peek at Vauxhall’s new concept GT X Experimental, which Adams and his design team have been working on for a while now. However, it was also a good chance to sit down and talk with him about the bigger picture: the future of car design and the tech that’s going to be on offer.

Initially, and rather unexpectedly, the designer explains how working on this particular car concept has allowed him to pare down the tech, with a concerted effort by him and his team to trim away the tech fat and end up with something minimalist and practical.

While the design does look wildly funky, there are lots of common sense ideas on show here (and, let’s face it, Vauxhall is generally seen as being a provider of sensible cars), but with the GT X Experimental, Adams sees the company as having the opportunity to zing things up a bit. And, although this is firmly in concept territory, the GT X Experimental has a few tricks up its sleeve that could be implemented in forthcoming Vauxhall cars.

“If you go back to why we’re doing this then we’re obviously changing and not to redefine our brand but to sharpen it,” says Adams on what is fuelling this rebirth. The manufacturing giant Group PSA acquired the Vauxhall and Opel brands in 2017 and Carlos Tavares, Group PSA CEO clearly wants to develop a more dynamic edge for Vauxhall, whilst retaining the approachable feel that makes it so appealing to buyers.

“Carlos has been really strong around that and he wanted real clarity. He also wanted to know how to project that externally too,” says Adams, “so there was a lot of work on defining what the brand is. In parallel to that I was working with my team on how we take those values forward. While we’re launching those new brand values we’re bringing this new car to the fore to really illustrate our objectives.”

Vauxhall reckons the GT X Experimental sets the tone for new models in the 2020s. It is, in essence, a five-door, all-electric, coupe-style compact SUV. Of course, it is also a concept, but it packs plenty potential on the innovation front. There are also more radical styling flourishes, which says Vauxhall, is the first physical representation of how its production-vehicle design will evolve in the coming years. In addition, the mini SUV is also seen as reflecting Vauxhall’s promise of an electrified vehicle in each of its ranges by 2024.

“We wanted something that, number one, would be recognisable and also seen as attainable by real people,” says Adams. “We looked at small SUVs, which is the biggest growing segment in Europe, and actually doing a vehicle in that market makes it super challenging, especially for a car that is just over four metres long. It’s a tough package in which to do anything interesting, but I think you’ll agree it’s got a lot of personality and character, even though the footprint of the car is actually very small.”

The exterior is certainly engaging and the eye-popping contrasting colours highlight the radical curves, which around the back of the roofline offer up a whiff of what made the Vauxhall Adam city car so good to look at. And, at the front, the so-called Vizor.

“We wanted to take a look at what could be the new face of Vauxhall,” adds Adams. “So the front end became a real focal point. And then, similarly, how could we take the moves in interior technology going forwards and bring that into an interior that was bold and pure.”

It’s that interior that really does fire up the imagination. The dashboard is dominated by a large expanse of digital screen technology, dubbed Pure Panel. However, this isn’t quite as flamboyant as something like the enormous digital dash found in BYTON’s all-electric M-Byte SUV. It’s actually quite minimalistic.

The designer explains that this is where the digital detox part of the design equation came into play. Controls are less rather than more, with the emphasis on giving the driver what they really need, rather than lots of tech fluff that they might think they need, but actually don’t.

So in that respect you’ve got core essentials like a speedo, and navigation right at the fore, with less superficial stuff brushed aside. That said; there is still apparently the built-in concept of being able to take a selfie from the dash. On each end of the dashboard there are electronic views of the road behind, views that are captured by small cameras that protrude from the front wings.

As a design challenge then, was the GT X Experimental project a dream come true. Was he able to do pretty much what he wanted? “Well, yes and no,” says Adams with a smile. “It’s surprising, because you’d think designers would want to go off and do anything, right? But actually they like, I always call it a framework, but not an overly restrictive set of boundaries.”

What, one wonders, are those core factors that make up the framework? “Well, if the brand is about being approachable and progressive then the approachable aspect was one of the hardest things,” reckons the designer. “How the hell do you put that into a concept, how do you get that connection? That took a little while to get traction. But, if you take all of the things we did and we did all those for a reason then actually that fits in very nicely with ‘approachable’.”

“Every element had to fit to that brand message,” adds Adams. “Design is the visualisation of the brand, it’s not a playground for designers to go and do what they want. They need to go and illustrate whatever those brand values are. Every car has its challenges though. Small cars are usually the biggest challenge because they have all the packaging constraints, technology constraints, cost constraints. Pedestrian protection is hard to do while crash protection is even harder. Everything is sort of turned up to eleven on a scale of 10 when you’re doing a small car. So if you do a great small car then you’ve really achieved something.”

Adams reiterates that there were aspects of the design that Vauxhall would subsequently like to roll out in production vehicles coming sooner, rather than later, despite them being purely concept creations at present. “I said to my team that was how I wanted to execute this vehicle.

"If we take the front face for example. We didn’t just take this car as an example and go off down a blind alley, because we really liked the conceptual Vizor approach and wondered how that would apply itself to bigger cars, taller cars, commercial vehicles and so on, because sometimes things don’t translate.”

The design team went on to spend several weeks trying out many different iterations of the Vizor design, checking that it could work on other models. The conclusion was that this is something that could soon feature on other vehicles in the evolving range.

“That’s why we’re confidently saying that the Vizor is something that we are going to bring forward on future production cars,” notes Adams. “It’s the same with Pure Panel, it won’t be exactly the same as you’re seeing on this concept car, but the key ingredients for those things will be coming into production. We want to deliver on the promise.”

In some ways, the advancement of technology and the materials at his disposal is making Adams's job more interesting as time rolls on. How much has that changed his capacity for making the production model much closer to that eye-popping concept?

“It’s changed it a lot,” he says. “Even just simple things like pressing a sheet metal body panel… not that long ago they had to be physically proven out and you’d find something would tear or it wasn’t malleable enough. There were limitations in the process. Whereas now we can do so much with CAD modelling and simulations, all sorts before you even go physical. You can do lots more iteration loops and therefore get more out of less.”

Adams raises the point about Peugeot, Citroen and the DS brands, which also come under the umbrella ownership of Group PSA. “Four or five years ago they were pretty anonymous,” he reflects. “So they have been extremely focused and now they’re really joining the party. It’s something that we’re working really hard on too. All of our brands have a very distinctive role to play and all are different from each other. I think that’s very clear.”

And, perhaps, some of the elements you see here will appear on Vauxhall’s best-selling small car, the Corsa, a new version of which is set to hit forecourts during 2019.