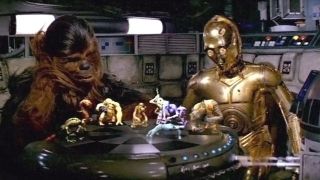 A long time ago in a galaxy far, far away, we'd dreamed of the day that we'd see the original Star Wars trilogy in 4K. Now, thanks to the launch of Disney Plus, that day has come – and with Dolby Vision HDR and Dolby Atmos soundtracks to boot, too.

We already knew that Disney's streaming service was going to launch with an entire slate of Star Wars films – including the all-new The Mandalorian TV show – but it's come as a complete surprise to find all the films (prequels, sequels and spin-offs included) streaming in 4K with the premium Dolby Vision HDR format supported.

A new hope for cinephiles

Before you ask, yes, sadly, it's the George Lucas tweaked Special Editions of the original trilogy, so you'll have to blink at just the right moment if you still want Han to shoot first.

But this is a treat – until this point, only the newer movies The Force Awakens, Rogue One, The Last Jedi and Solo: A Star Wars Story have been made available in 4K, and none offered the premium Dolby Vision viewing experience. Unfortunately, Rogue One, Solo and Episode VIII: The Last Jedi aren’t yet on the new service.

So, how well do they hold up? The newer films, naturally, look better under the scrutiny of 4K definition than the original trilogy – in 4K, some of the hand drawn backdrops for sets and miniatures scenes are more visible faked than when watching at a lower definition. But you've never seen the Cloud City saber fight between Darth Vader and Luke Skywalker look as good as with the searing lights and inky blacks of Dolby Vision.

It's a long awaited arrival then, and a huge coup for the Disney Plus service. Throw in all the Marvel flicks, exclusive TV shows and classic Disney back catalogue and it's turning into a show-stopping launch – in the territories it's available in, that is...