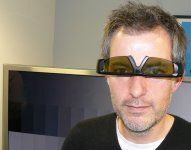 Sony, Samsung and Panasonic have shown that they are not backing down on making active shutter the 3D glasses format of choice, by announcing a new standard initiative with Xpand.

The three home entertainment heavyweights have backed active shutter glasses technology for the home, but this year saw a trickle of new TVs by LG and the like that offer polarised 3D.

While LG purports that this technology offers as good a picture quality as active shutter glasses, Sony, Samsung and Panasonic have remained firm that Full HD 3D is the future, despite the glasses being more expensive.

The companies teaming up may well remedy the price problem, as it is going to standardise the glasses system between them. And even if it doesn't drive prices down, it will mean that you can bring your own glasses to a mate's house without the fear of them not being compatible.

"Universal glasses with the new IR/RF protocols will be made available in 2012, and are targeted to be backward compatible with 2011 3D active TVs," said the release.

"Today's announcement marks a unique collaboration of the world's leading 3D TV manufacturers and 3D technology providers for the benefit of consumers. Glasses utilising 3D active technology benefits consumers in that they enable Full HD 3D picture quality to be displayed to each eye, as well as a greater freedom of movement thanks to Bluetooth technology."

Although these glasses won't get an airing until 2012, TechRadar is hoping that there will be some on show at IFA 2011, which takes place this September – around the same time that the license should be greenlit.