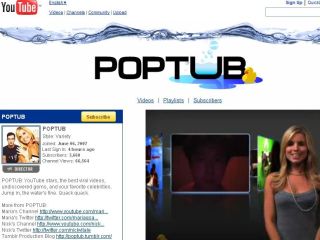 Google has stepped up its move into the world of media, quietly releasing a celebrity news show called PopTub over its YouTube arm.

The show, produced by 'Who wants to be a Millionaire' creator Michael Davis' Embassy Row, launched last week.

It's another step for Google into the world of content provision rather than facilitating access to somebody else's content - the search and advertising business that made it one of the world's most powerful companies.

Next stop the world?

Previously, Google has launched Seth MacFarlane's 'Cavalcade of Comedy' over YouTube – the online video provider that it owns, but PopTub is structured much more like a traditional television show and represents a major step forward.

The Google Content Network (GCN) will be used to propagate the shows across many sites, and provide the targeted advertising which will decide if the venture is a commercial success.

Of course, should Google make a success of this type of show, it could become a key threat for major broadcasters.

Holding around two thirds of the global search market means that Google potentially holds the keys to the kingdom in terms of online broadcasts, should it leverage its dominance to push people towards its own content.