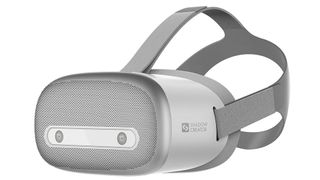 The future of VR is wireless and standalone – that much has been made clear by the launch of the Oculus Go, HTC Vive Focus and the upcoming Oculus Quest. But it's not just all about Oculus, Facebook and HTC when it comes to virtual reality – enter Shadow Creator and its Shadow VR standalone headset.

Like the Vive Focus, the Shadow VR is a Vive-Wave based 6DoF headset, which will be accompanied by as-yet-unrevealed controllers that the company has made itself.

Powered by the Qualcomm Snapdragon 835, it's packing a slightly lower resolution display of 2,560 x 1,440 compared to the Quest and Focus' 2,880 x 1,600 screens. You still get a 110 degree field of view though, putting you at the center of the action without unnatural limitations on your vision.

Following the Vive Wave reference design, you've again got stereoscopic cameras on the front of the headset, allowing for inside-out tracking of movement.

There's not much else to go on for the Shadow VR at this point then, other than price and release date. It's set to cost $399 and release on November 11. That's a match for the Quest, and a relatively short time until release for a headset coming out of left field.

With a growing list of 15 companies working alongside HTC on Android-powered VR, it'll be interesting to see what the future holds for wired, desktop based VR.