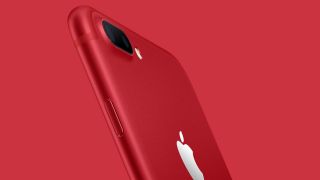 Currently you can only get the iPhone 8 and iPhone 8 Plus in silver, gold and space grey, but Apple could be about to add a fourth color to the mix, as reportedly a red shade might be announced today (Monday 9).

That’s according to an internal Virgin Mobile memo, sent to its employees and obtained by MacRumors.

Specifically, the new color would be a limited edition (PRODUCT)RED shade, which we’ve seen Apple launch previously for the iPhone 7, so the iPhone 8 version is likely to be a similarly bright red.

Some proceeds from the sales would also presumably go to the (RED) AIDS charity.

The memo states that this red iPhone 8 would be added to Virgin Mobile’s inventory immediately after today’s announcement, so you may be able to pre-order it in a matter of hours, although it’s unknown how long it will be before the phone starts shipping.

There's also no word on what it will cost, though we'd expect it will be the same price as the existing shades, as nothing other than the color is likely to change.

And although this information is so far unconfirmed it’s looking like it might well be accurate, as a red iPhone 8 has been rumored before, and Apple reporter Mark Gurman has tweeted that the launch should happen this week.

Interestingly though the memo makes no mention of a red iPhone X, or a blush gold one, the latter of which has previously been rumored and even caught on camera.

So we might be waiting longer for that if it ever arrives, which is a shame, since right now you can only get Apple’s top-end iPhone in silver or space grey.