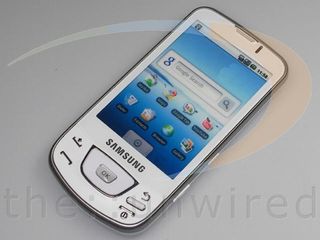 Samsung's first effort at an Android-based mobile phone might not have debuted in the UK, but that hasn't stopped the i7500 Galaxy appearing in white ahead of the launch.

The specs of the phone remain the same, meaning we're sadly not seeing the i5700 Galaxy Lite phone Samsung seems to be releasing soon.

But that does mean if you're giddy with excitement over Samsung and Google joining forces but not a fan of black (and we all know it's about the graphite or mocha or whatever other fancy colours manufacturers are after these days) then this picture should make your day a whole lot better.

More than a Hero

Don't forget, we're seeing a phone with a 5MP camera (with flash), a 3.5mm jack and super-thin shell in the Samsung i7500 Galaxy, which still out specs the HTC Hero.

The i7500 should be debuting in the UK any day now - O2 confirmed to us a few weeks ago it would be stocking it around the beginning of August - so we're just sitting here flicking peanuts at one another until that day finally dawns.