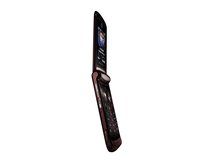 Motorola might be placing hopes on its new superphone, the Alexander/ZN12, but that hasn't stopped it looking back at past successes and thinking 'the world needs another Razr'.

We would hope that the first phone, which was a beautiful handset but rubbish on the specs, would be kept as a decent memory, currently unsullied by the Razr2, which nobody seems to have noticed.

But no, Moto wants more, and the Razr3 is apparently on its way in Q1 next year, under the codename of 'Ruby' according to the internet rumour mill.

Expect something along the lines of touchscreen tech inside and out, 3.2MP+ camera, HSDPA and a new metallic chassis.

According to Unwired View, the chat is that the new phone will use the Symbian UIQ3.3 platform, after which Moto will re-touch it to fit in with the rest of its range.

Moto seems to have forgotten what the public want in a phone after the success of the Razr, and we at TechRadar hope it goes back to its innovative roots (StarTAC, anyone?) and brings us some new designs to drool over.