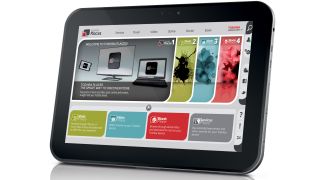 Toshiba has officially launched the AT300 which comes packing a quad-core Tegra 3 processor and Android 4.0.

The 10.1-inch LED display is fashioned from Gorilla glass, while the brushed aluminium chassis keeps it sleek with the 8.95mm-thin frame weighing in at 590g.

For the snap-happy there are two cameras – a 5MP affair on the rear with a 2MP on the front. Happily, there's a full-size SD card slot so you can up the internal storage of either 16GB or 32GB quite significantly.

Port-wise it's a micro-fest, with micro-HDMI and micro-USB both in attendance.

Toshiba is also at great pains to point out that the AT300 also has access to Google Play and the many apps, ebooks, films and what have you contained therein. Quite revolutionary for an Android tablet, that.

Still, the Toshiba AT300 is quite a step up from its predecessor, the AT200, which managed only dual-core processing and old-school Honeycomb.

Whether the AT200 will get a little price cut remains to be seen but the AT300 is set to hit the shelves at some point in Q2 so should arrive sometime before the end of June.