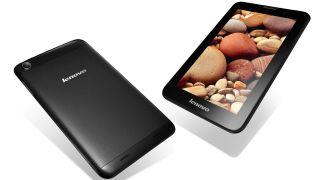 We're sure the halls of MWC 2013 are ringing with news of Lenovo's three new Android tablets.

There's the option to go for a 3G/HSPA+ edition, and Lenovo reckons you can eke over eight hours of Wi-Fi web browsing out of the thing - not sure how well that bodes for streaming HD video over a data connection but we'll reserve judgment till we get our hands on one.

Lower down the scale is the A3000, a quad-core 7-inch tablet with an IPS screen and microSD port, running the latest version of Jelly Bean (4.2).

The relatively chunky slate is 11mm thick but does offer the option of 3G if you fancy paying a little bit extra for it.

Languishing at the shallow end of the spec pool is the Lenovo A1000, another 8-inch slate with only a 1.2GHz dual-core processor, Android 4.1 and 16GB of on-board memory (expandable with microSD).

Lenovo's billing this one as a 'pocket studio' because it comes with front-facing speakers and Dolby Digital Plus.