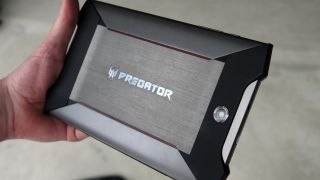 Acer isn't a name you'd really associate with gaming, but starting today it wants to be taken more seriously.

Acer has revealed a new line of "Predator" gaming machines which will be rolling out over the course of the year. Included in that lineup is a Predator gaming-focused tablet that wants to compete with Nvidia's own.

How it will match the Shield Tablet on power remains to be seen (we only got to play with a dummy 8-inch unit) but we do know that it will feature haptic feedback - as featured on the PS4 and Xbox One controllers - through the touchscreen, but not a bundled gamepad like the Shield Tablet does.

It's also got four front-facing speakers to hopefully give you a decent, immersive sound experience, though that might be slightly lost on the 8-inch form factor. We will see.

Other details on the tablet are thin on the ground, but we're told that it'll be arriving in Q3 of this year.

Never one to knowingly miss a 'world first' moment, Acer also just launched the first ever curved monitor to feature Nvidia's G-Sync tech. For the uninitiated, G-Sync is a technology that delivers a smooth gaming experience by eliminating screen tearing and stuttering.

That, paired with IPS technology and 178-degree viewing angles, makes for possibly the most appealing part of the Predator range.