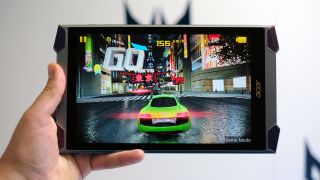 With 1 million games downloaded every day, French publisher Gameloft is one of the planet's biggest smartphone videogame developers.

If you've ever whipped out your handset to take a look at the latest titles in the iOS App Store or Google Play Store, the chances are you'll have come across Gameloft's Call of Duty-esque Modern Combat series, or one of its high-speed Asphalt racers.

In recent times it has brought new franchises Sniper Fury and Dungeon Hunter, in addition to quiz game Trivial Pursuit to smartphones.

The evolution of mobile hardware has allowed developers to take advantage of increasingly powerful computing and graphics processors in recent years. And for Nicolas Pochez, MD UK & Ireland at Gameloft, smartphones are more advanced than traditional games consoles on a technical level.

"If I was to be bold, I would say that mobile gaming has overtaken console gaming, but it depends on the machine," he said at OMD UK's Innovation Week. "Looking at smartphones today, some are faster than three-year-old PCs."

The more that smartphones increase in power, the less it makes sense for games to be played on tiny six-inch (and smaller) screens. For Pochez, taking mobile gaming into the living room through hardware such as Apple TV marks a natural progression.

"Playing games and apps on TVs is going to be huge - it's the ultimate experience," he says. "You can play games on smartphones on the move, and when you get home you continue where you left off on the TV, which means there's no more console.

"Apple TV is just the start of that experience, and it's really interesting for us because we believe it's a way for consumers to enter the living room."

Virtually here (and there)

Pochez says that other innovations include a switch to HTML 5 (which allows games to be developed in less than 100MB), larger smartphone displays, and hardware-based features — such as Apple's haptic-feedback driven Force Touch. But the next big frontier, he says, is virtual reality.

"The VR revolution is bringing about truly immersive experiences where you're completely surrounded 360-degrees in games," he says. "However, it's important that VR doesn't become a gimmick." The danger, he adds, is adding VR to games where it's not needed.

"We've had discussions with hardware makers Oculus and Samsung to bring our games into VR, but it's important for what you do to be relevant," he says. "Introducing VR into casual games is not interesting.

"I like Candy Crush, but playing it in VR wouldn't be that much fun. Bringing it into a racing or FPS game would make more sense."

Through smartphones, VR has the potential to reach beyond traditional gaming. Pochez provides the example of how it could allow two friends to wear a headset and virtually join a popstar on stage in New York or Tokyo.

Or it could allow spectators to get closer to the action at gaming tournaments, such as the League of Legends final that took place in Berlin last month, from the comfort of their own homes.

The way that we pay for mobile games has evolved along with smartphone hardware itself.

As developers have turned from using a premium pricing structure (think £5.99 - around $9) or more per game, Pochez says that 2011's "Android Wave" saw a shift to free-to-play and freemium games.

"Freemium gives you access to rich content which can expand the lifespan of your gaming experience," he says. "We release updates as people keep playing our games games more than two years after we launch them."

The stats show that smartphone gamers are, for the large part, happy to be shown advertising so long as it benefits them in some way.

According to IAB UK, 75% of gamers accept some level of advertising in free apps or online games, and 61% are happy to see ads in free games. And more than half (58%) don't mind advertising in games if it means they pay less for them.

Pochez says that the problems posed by adblockers and the automatic blocking of ad content on websites is yet to affect the mobile gaming world.

"It's not having an impact on the gaming industry yet, but we're taking all of that into account," he says. "It all comes down to the quality of mobile apps. Today, mobile gamers often spend their money on things like mini-game purchases and still end up with ad banners, so it's a crap experience.

"You have to look after mobile gamers. Keeping the consumer happy is the most important thing."

OMD UK's Innovation Week is on until Friday 6 November and features talks from Google, Microsoft and others.