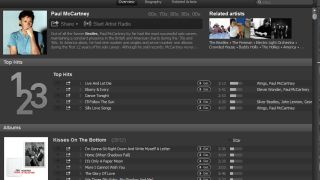 A bit of good news for Macca fans, the ex-Beatle's back catalogue is back on Spotify, Rdio, Rhapsody and Deezer and ready to stream.

Paul McCartney's songs have been few and far between on the streaming front since he and his label, Concord, pulled them in 2010.

McCartney seemed rather more enamoured of iTunes, even releasing his latest record by playing a live show via Apple's music store.

But now you can stream rather than buy the latest record Kisses on the Bottom as well as most recent works with a bit of Wings action thrown in for good measure.

No longer a band on the run

Yesterday, Spotify's annual chart run-down revealed that streaming fans still flock to high-profile artists who hold albums back for some months after release.

Rihanna, Coldplay, Adele and Taylor Swift all came in high in Spotify's streaming chart for 2012 despite keeping recent releases from the service at first.