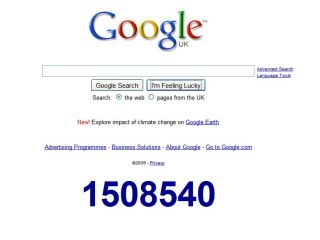 Google - out for the count

Google has revealed its countdown to the end of the year, courtesy of a nice little Easter egg on its homepage.

For those who want to see just how many seconds remain from now until 2010, simply click on the 'I'm Feeling Lucky' button when there's nothing in the Google search box and you will be shown the countdown.

Google did a similar thing last year, and while there's nothing to lead you believe that something will happen at 12 midnight on the 31 December (other than the end of the year) you never know what to expect from the company.

Bear in mind this is the company which recently outed the Google Phone and released Google Chrome right out of the blue.

If you want to see the Easter egg for yourself, then click here and watch as the seconds tick by.