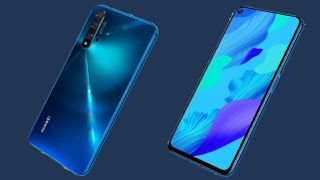 Correction: A previous version of this article incorrectly claimed that this handset wouldn't include access to Google's services.

New Huawei phones aren't allowed to include the Google Play Store, making it very hard to access most of the apps you use, but one has just launched that does have them.

This is the Huawei Nova 5T, launched in August in China. That's why it's exempt from the ban, as it fell under a grace period, unlike the Huawei Mate 30 and Mate 30 Pro launched in September, which don't have access to Google Play services.

The Huawei Nova 5T seems to be a decent smartphone for its £399 (roughly $500, AU$745) price tag, joining the Huawei P Smart (2019) as a tempting non-flagship Huawei device, but we need to test it fully to say for certain. It'll be available in November from most retailers.

What is the Huawei Nova 5T?

In many ways, the Huawei Nova 5T is the Honor 20 Pro, from Huawei's sub-brand Honor. It has the same 6.26-inch display, side-mounted fingerprint sensor, four-camera array, and more.

Well, the four-camera array is slightly different. The Huawei Nova 5T has a 48MP main camera, 16MP snapper with ultra-wide angle lens, 2MP macro camera and 2MP 'bokeh' camera. Instead of that last snapper, the Honor 20 Pro had an 8MP telephoto.

The front-facing camera is a 32MP camera housed in a 'punch-hole' cut-out.

There's a 3,750mAh battery in the Nova 5T, which is a decent size for a smartphone, and is slightly above average, which will be sure to power the slightly-outdated Kirin 980 chipset. There's also 6GB RAM and 128GB storage.

All in all, the Huawei Nova 5T is a decent mid-range device, and could be a great smartphone for people looking for an affordable device with impressive camera performance. Since it could be one of the last Huawei devices with Google apps, if you're a fan of the brand, it's definitely worth looking in to.