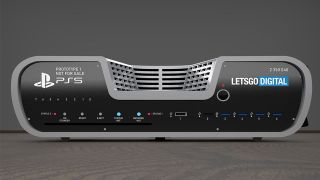 We know its name, we know its specs and now we might finally know what the PS5 looks like. Or, at the very least, confirmation of what its development kit looks like.

The above render, courtesy of Let's Go Digital, is based on a spy shot received by Zone of Tech, which shows what's alleged to be a real, working PS5 development kit in its natural habitat – the offices of an anonymous PlayStation 5 developer.

Check out the original leaked image below:

The image, if legitimate, all-but confirms the many leaked rumors and renders concerning the PlayStation 5's hardware design, one that sports an unusual V-shaped cavity and excessive amounts of ventilation.

What does the image show us? There's a number of buttons: On/Standby, Reset, Eject (for the double layer 100GB-reading Blu-ray drive), System Initialisation and Network initialisation, all on the front left. There are also a number of status lights, numbering '0' to '7', which likely relate to CPU cores engaged, but could also be a status light for controllers connected.

To the right there are 5 USB ports (one USB 2.0 and five likely USB 3.0 ports – the final port being obscured by a cable), as well as a USB type B port. A small circle above could well be a camera built into the console, according to earlier patent filings.

Interestingly, rubber feet appear to be on the top side of the console, suggesting that devs are being encourage to either flip the console for stress testing and convenience, or to stack them when working on demanding games.

Even if we are to assume this is a PS5 dev kit for real out in the wild, it should only really be used to speculate on what the final design of the consumer console will be, rather than considering it wholly indicative on the machine to come.

Dev kits are specially designed to be robust, and to support a console working under extreme load so as to allow the developers to push their creations to the maximum without frying the hardware they are working on. It's also designed, at this stage, to help find any flaws in the final PS5 consumer hardware industrial design.

With Sony likely a full year away from the launch of the PlayStation 5, there's plenty of time for its team to create something a little less alien-looking.