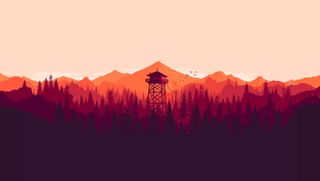 Back in the '90s, when everyone wore brightly coloured trousers and worshipped the cult of Spice, gaming in first-person was split into two very different camps: the first-person shooter (powered by the rocket launchers, shotguns and BFGs of Doom, Quake and more) and the first-person puzzle game.

The classic run-and-gun shooter provided a visceral gateway into violence of the most intimate kind.

The corridor FPS was a beast of speed and unrepentant violence - littered with jump pads, multi-kills and bodiless screams of, "Godlike!" Times were simpler then.

Even the popularity of the stealth-minded Goldeneye 007 on Nintendo 64 (a sub-genre in itself inherently designed for slower, more protracted gameplay) found its cult following in the sprinting, proximity mine-smattered madness of its local multiplayer.

Then there were the first-person puzzle adventure games, a la Myst and Riven. Lacking the direct controls of their corridor shooter brethren, these exploration sims were bound to the older trial and error world of point and click, but were no less engrossing.

Instead of burning your retinas off with gunfire, they offered their wares in measured tones rather than pools of shell casings and gore.

They were a breath of fresh air, but hardly the kind of game to take the mainstream by storm. They were the darlings of professional criticism, titles more likely to find cult status than system-selling godhood.

And so the shooter, beefed up with military settings, hyper-powered grunts and sci-fi weaponry, found its feet and became the genre that propelled videogame consoles, and gaming worthy PCs, into homes across the world.

These days shooters have become so commonplace we even get up in arms when a game gets a generic looking piece of box art. Giant set-pieces and overtly long action sequences have become grossly stale as the law of diminishing returns starts kicking the genre's face off with steel toe-capped boots.

It's the intimacy of the perspective that has made the FPS seem so much paler in comparison to its simpler origins - we love immersing ourselves through the eyes of an avatar, but subject us to too much noise and gunfire and we soon become desensitised.

That intimacy becomes watered down, like too many narrative twists in a film.

But just because the FPS fell into a near two decade-long supernova doesn't mean those wiley, puzzled minded action games have all but died out.

The Myst series continued to be obtuse in its own charming way and plenty of other titles began to explore a world where interaction meant engaging and consequential dialogue not body counts and high scores.

That maturity, through games such as Deus Ex and System Shock, gestated over time until now when the gaming public's tastes have started to hunger for something a little different, something that's not so in your face and doesn't need to scream or shout.

Something that hands the reins back to the narrative and the gameplay, rather than an unending thirst for bullet-riddled corpses and pockets stuffed with XP.

From the torturously rewarding puzzles of Jonathan Blow's The Witness to the family secret-laden dichotomy of Gone Home, we're seeing the first-person perspective through fresh and reinvigorated eyes. And these titles aren't just the creative exploration of independent developers, they're a direct reaction to a shift in gaming tastes.

Would the likes of Campo Santo's The Firewatch or The Chinese Room's Everybody's Gone To The Rapture have received such critical acclaim had they dropped during the heydey of Call Of Duty and Halo?

Considering the last generation of videogames was defined by the total domination of the shooter in both third and first-person flavours, it certainly seems unlikely but then again these games are a byproduct of the gaming trends of yore.

The over-saturation of the shooter left us yearning for something with a bit more substance.

This doesn't mean the shooter as we know it is dead - the return of Doom and it's back-to-basics gunplay is proof enough of that - but the success of titles such as The Vanishing Of Ethan Carter have finally proved that the gaming public doesn't just want mass bullet death - it craves something more tangible when it stares through the eyes of its digital self.

The narrative is king

What makes games such as The Witness or Firewatch so engaging is the purity of its composite parts, These aren't games designed to pander to the tropes of modern triple-A games design - there are no flags to collect here or intel packages to find, no radio towers to switch off or XP bars to fill for a sweet looking scope upgrade.

It's all about the experience itself and the depth of your input as a player.

Firewatch, with its baked-orange visuals and almost haunting setting, doesn't want you to run around every nook and cranny in search of goodies - it's real treasure sits front and centre in the engaging and natural flow of its dialogue.

It doesn't matter that you're just walking from one point to another, opening supply crates and checking your map like a keen rambler - these moments and the memories that are forged in them are just as engaging as any FPS death tour.

A stroll through the photorealistic Shropshire village of Everybody's Gone To The Rapture is the antithesis of the modern shooter.

Slow, measured and utterly obtuse, it's a digital world designed to be savoured. An art gallery of houses, woods and streams, EGTTR offers an experience that draws you in with every street corner and autumnal vista.

There's a story there, a narrative written in every cobblestone and blade of grass, but it's one you need to work for over time.

These are the games made by designers who want the world's they craft to be another character in your journey, one full of wonder and meticulously crafted detail. These are games created to give story and narrative prominence in a way that informs the gameplay.

And if the widespread acclaim the likes of The Witness and Firewatch have received is anything to go by, the first-person experience is only just getting started.

With the new generation of virtual reality headsets a tantalising prospect on the very near horizon there is the real possibility then that these ultra-immersive, slow-paced first-person adventures could become the dominant genre for VR.

Fast-paced shooters don't really work when your vision is lurching around, and you're strafing for your life around each and every corner, while the rest of you stays relatively still. The inner-ear is not designed for such things and long play sessions could have serious ramifications...say, for meeting your lunch in reverse, for example.

A slow, measured stroll around the beautiful worlds of The Witness, The Vanishing of Ethan Carter, Everybody's Gone to the Rapture or Firewatch, on the other hand, is a far more involving, immersive experience than any amount of virtual vomit-comet run-and-gun.

Virtual reality and the first-person experience were almost made to go together. And that partnership could help both the genre and hardware go mainstream this year.