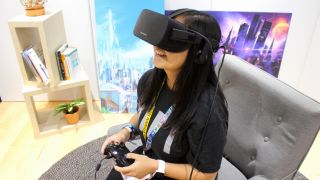 We're only a few hours into CES 2016 and virtual reality has already stolen the show. Not only did HTC reveal its overhauled Vive headset, but Oculus announced that Rift pre-orders will go live on January 6 and some early Kickstarter backers will be getting one for free. One problem: we still don't have a price.

Ever since the first developer kit was unveiled, we've been trying to guess what a ticket to Oculus' virtual will be. The outlook has changed over the course of the last two years, with Facebook buying Oculus VR, the reveal of the Touch controllers, and the recent announcement that said controllers won't actually launch until later in the year.

But the value proposition of virtual reality remains the same - so what would you pay for it?

We expect Oculus to announce the price when pre-orders go live. Until then, here's what we think the final cost might be.

I'm expecting the final consumer versions to come with a higher price tag than the initial devkits, because, y'know, capitalism. But also because the Rift is going to demand one hell of a beefy gaming rig - and a graphics card not far off that price - to get the most out of it.

I'm more likely to go for the Rift over the Vive for the simple fact that I'm a Brit and as such don't have a living room big enough for me to flail around in without breaking stuff.

I'm hoping for something cheaper, but based on the beefy VR-ready system requirements provided by Nvidia, the Rift will likely be just another pricey component to add onto your already expensive PC rig.

It's hard to say yet whether the Rift will be more affordable than HTC and Valve's Vive, but I'm willing to wager on it. Looking back, HTC has mentioned publicly that it intends on making Vive the most "premium VR experience" around. And with added tech, like the front-facing camera, it will likely be the more expensive option.

Even so, I'm not sure that a price difference would be enough to make me settle for the Rift. I'm just too excited for the possibility of Half-Life 3 on the Vive.

I reckon £350 - the price of a next-gen console, but the price will go up with the amount of games bundled. Whatever the price, HTC and Sony will definitely take note and price their hardware accordingly.

Matt Hanson - How To Editor

Palmer Luckey has been preparing us for the announcement that the first version at least will be pretty pricey – a recent tweet said: "Reminder of something I have talked about before: VR will become something everyone wants before it becomes something everyone can afford."

So yeah I think it will be about the same price as getting a decent TV. Any less is unlikely for this first version, any more and it will seriously hamper adoption.

For the record I think the PlayStation VR has the best shot at this if Sony prices it well, with a pretty large PS4 user base now.

Although I love the idea, I'm not in any hurry to jump the VR bandwagon until it proves it is all that was promised. I tried Oculus early on in its development and even then I was impressed, but the undoubtedly high price tag will make it a secondary concern for me. I'll see what the feedback on the retail version is like, and then maybe reconsider.