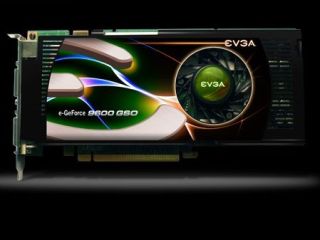 Offering none of the usual buzz surrounding its announcements, Nvidia has subly outed a new low-end card by just posting the details on its website. The GeForce 9600 GSO has been rumoured for a little while, and its stats reveal its lowly position at the base of the series underneath the 9600 GT.

The GS sufflix may well have been replaced by GSO to make things seem, ahem, a little simpler. After all, GT and GS are quite similar yes?

Mind you, the cheapo pixel cruncher hardly skimps; there’s still SLI capability as well as support for PCI Express 2.0, Nvidia’s PureVideo HD for Blu-ray playback and DirectX 10. Not bad in a card that will sell for around the £100 mark.

The GSO will go head to head with the forthcoming Radeon HD 3830 low-end series from ATI. The GSO looks like it will be on shelves in a couple of weeks – keep ‘em peeled.