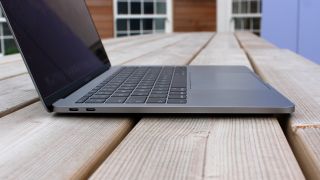 Another patent has been uncovered that points to a possible development with future products, in this case Apple’s MacBooks might just see the return of the MagSafe connector.

As spotted by Apple World Today, a patent has been filed by Apple for a ‘magnetic adapter’ which uses a MagSafe design, featuring an adapter onto which a USB-C connector can be attached (or indeed another type of connector).

For the uninitiated, the original MagSafe connector used a magnet to attach itself. This meant if you had your MacBook plugged into a power socket and someone tripped over the cable, the connection would break and the cord would simply detach – as opposed to yanking your laptop onto the ground and possibly breaking the thing.

The MagSafe connector was unceremoniously dropped from the MacBook and new MacBook Pro models with the introduction of USB-C, however, it’s still on the aging MacBook Air.

This patent shows a product which would essentially work in the same way, except in this case, the cord would detach from the back of the USB-C adapter – as shown in the image above – still ensuring that your notebook isn’t accidentally pulled off a surface to its potential doom.

If MagSafe is a feature you wish hadn’t been stripped from the new MacBook Pro, then, maybe your luck is in for the future. There are plenty of folks in that particular boat, by all accounts.

That said, as with any big technology company, Apple files a host of patents, many of which are speculative, so this is a long way from any guarantee that the concept will ever come to fruition.

If nothing else, though, it shows Apple understands that the feature is missed by many. That’s something third-party accessory manufacturers have already realized, mind, with similar solutions to this already out there such as Griffin Technology's BreakSafe which was launched last year.