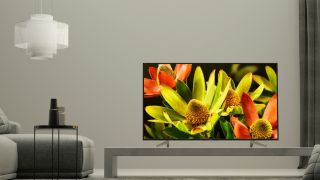 4K TVs are everywhere – and they're getting bigger. Over the past few years, there's been a resolution revolution as Full HD TVs have become virtually extinct in the face of new, improved 4K TVs.

From being a cutting-edge new tech a few years ago, 4K TVs are now the mainstream, accounting for nearly 50% of all TVs shipped worldwide. Each has a resolution of 3,840x2,160 pixels, which equates to eight megapixels. That's so much more detailed than the paltry two megapixels offered by Full HD TVs.

So why can some 4K TVs be so thoroughly underwhelming?

Just because you have a 4K TV, it doesn't mean that everything you watch is in 4K. In fact, unless you have an Ultra HD Blu-ray player, have a Premium subscription on Netflix, and/or have 4K TV channels coming into your TV via a 4K set-top box, having a 4K TV makes zero difference to the quality of what you're watching. Most of us are effectively blowing-up the same quality video we used to watch.

Cue 4K upscaling, which all 4K TV have to some extent, to make high-def and standard-def TV channels, DVDs and streaming video look better when they're bigger. Here's what you need to know about 4K upscaling when buying a 4K TV.

Why do we need 4K upscaling?

"If you've got a full HD picture coming into the TV and if you didn't upscale it, it would take up just a quarter of the screen," says Gavin McCarron, Technical Marketing & Product Planning Manager at Sony Europe. "It would be then surrounded by an empty screen. What the upscaling process does it to ensure that the picture fills the 4K resolution of the screen."

How does 4K upscaling work?

There are various steps involved in adapting an HD picture for a 4K display. "It begins with an analysis of the signal received to determine what type and resolution it is – live TV or streaming, HD or full HD," says Deep Halder, Senior Product Manager for TV/AV, Samsung UK & Ireland. "Then comes the noise reduction. Edges, textures and details are then analyzed and sharpened accordingly. Finally, the signal is converted to 4K to match the native panel resolution." It's an incredibly involved process that requires powerful processors.

"The picture first comes into the TV from broadcast, Blu-ray, streaming service, whatever, and it gets analyzed for quality," says McCarron. "Sony uses a system of databases that are used to compare how different elements of that picture should look, and once that evaluation is done, the picture is upscaled to what we say is 'near 4K' quality."

Sony claims its 'lens to living room' approach is unique since it takes advantage of Sony Picture's vast experience with producing movies and TV shows, as well as its expertise manufacturing 4K video cameras used by the TV and movie industry.

"When you're upscaling from Full HD to 4K there is a lot of guesswork, and what we're trying to do it to remove as much of the guesswork as possible." Sony's 4K X-Reality PRO, like other picture processors, upscales at a pixel level. "It doesn't just look at the pixel in isolation, it looks at the pixels around it, and on each diagonal, and also it will look up the pixels across multiple frames, to give a consistency in the picture quality," explains McCarron.

It's also critical for upscalers to be able to tell the difference between detail and noise/Mpeg artifacts, as there's no use in upscaling the latter. Upscalers also seeks to improve local contrast and color within video.

How to test 4K upscaling in-store

If you plan to buy a TV from a physical store, understand something: All TVs in stores are ramped-up in terms of brightness to 'look better'. They're tuned to be much, much brighter than you would ever want a TV to appear in your own home. So when you've wrestled the remote off the salesperson, immediately turn the picture mode from 'vivid' to 'natural' or 'cinema' modes. Then ask to watch something that is not in 4K. The store only really wants to show you what 4K looks like on a 4K TV, which makes sense to them, but given that the majority of what you'll watch on it won't be in 4K, insist on live TV.

Which TV brands have the best 4K upscaling?

That's a tough one to call, but generally speaking, the cheaper the TV, the less likely it is to have 4K cutting-edge upscaling. You can see it in the messaging from all the major brands, which invest heavily in their various picture processing engines, some of which are reserved for their flagship TVs. For example, Philips has Ultra Resolution and its P5 Processor, while Sony has 4K X-Reality PRO for its regular 4K TVs and, for its Master Series, X1 Ultimate processing. Samsung offers UHD Picture Engine, while LG has Picture Master Processor and, on its OLED TVs, the Alpha 9 Processor.

How does the size of your TV factor into this?

Well, all picture processing suites are fixated upon making all kinds of video look good on 4K screens. So is it fair to say that the bigger the TV, the more advanced the upscaling needs to be, and the more powerful the processor should be?

"It's going to make a bigger difference the bigger the TV is," says McCarron. "The pixel density is higher on smaller screens, so it's not as crucial."

What about 8K upscaling?

If you think Full HD to 4K is tricky, the birth of 8K TVs just upped the ante.

So far, the 85-inch Samsung Q900R 8K QLED TV is all we have to go on, but it's fair to say that its so-called 8K AI Upscaling appears to be ground-breaking in that it uses machine learning, a form of AI.

"Millions of samples are evaluated, often comparing good and poor quality images of the same objects," says Halder. "The differences between the two – noise, blurriness, compression and artifacts – are analyzed (and) the result is an algorithm that accurately calculates how to make a low-quality picture look better." That information is then put into a data bank embedded in the TV’s processor for future use. "Whatever the image source – SD, HD, UHD – the TV has the information to work out for itself what the picture should look like on a native 8K display."

So as screens get both bigger in size and in pixel density, the future of upscaling is certainly AI, but whatever TV you buy, be sure to check out how low-quality sources look on it – don't just fall in love with the 4K demo reel and hand over your cash.