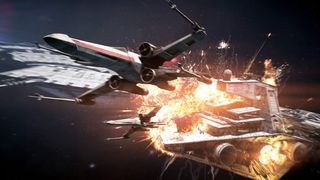 Star Wars hype is once again through the roof, thanks to the double whammy of the brand new Star Wars: Battlefront 2 game having recently been released, and the upcoming release of Episode VIII – The Last Jedi, and to celebrate we're once again running our Star Wars week that celebrates everything from that galaxy far, far away.

If you're eagerly awaiting your opportunity to step into a Stormtrooper's shoes – or you want to fight the good fight on the side of the Rebels – then Star Wars: Battlefront 2 is a fantastic game.

While it looks great on the PS4 and Xbox One, if you really want the best experience, with amazing visuals and rock-steady frame rates, then the PC is the place to play it – and we'll show you how to build a fantastic gaming machine to get the most out of Star Wars: Battlefront 2.

To get you in the mood for building your own PC. check out our time lapse video of us putting together the ultimate gaming PC.

We originally wrote this article, and made the video, for the release of the previous Star Wars: Battlefront game, which released just before 2015's Episode VII – The Force Awakens. Since then, PC hardware has come on in leaps and bounds, so we have fully updated this guide.

One of the best things about building your own PC is that you can pick and choose the components yourself, so you can build a machine that perfectly suits both your needs and your budget.

The hardest part is making sure the parts you've picked are compatible with each other, so that's why we've created this guide. By following our advice you can be sure that each component will work – and putting them together is surprisingly straightforward.

If you're more comfortable with building PCs then you can use this guide as inspiration to build your own personalised gaming PC to play Star Wars: Battlefront 2 on – just take some of our ideas and swap some parts out for ones that better suit your needs.

In this guide we'll show you how to choose the components for three types of gaming PC: a budget machine, which will keep costs down yet still provide an awesome Star Wars: Battlefront 2 experience; a mid-range PC that will deliver graphics that far surpasses what you'll find on the PS4 and Xbox One; and the ultimate gaming rig that money can buy.

This final PC is an incredibly powerful, money-no-object machine packed with some of the most powerful components on the market today. Not only will this enable you to max out Star Wars: Battlefront in the graphics department at 1080p, you'll also get amazing performance on resolutions as high as 4K.

It's also a machine that you won't have to worry about upgrading for a very long time.

We'll show you how to choose the best components for the PC that's right for your needs, then, you can check out how to build a gaming PC: a step-by-step guide to building the best PC to see how they're put together.