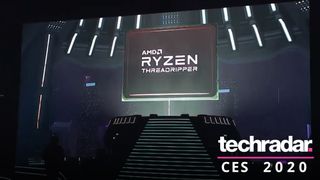 CES 2020 is by no means a computing show, with thousands of tech companies from every corner of the industry converging on Las Vegas to show us the future of technology. However, for those of us that are just, like, really into computers and PC components, this year was actually fairly exciting.

We got a load of new silicon from both AMD and Intel, a blisteringly fast monitor from Asus and a load of new computing systems from pretty much every major computing manufacturer on the planet.

So, because there were so many amazing computing reveals this year, we went ahead and gathered up 10 of the best things CES 2020 had to offer in the computing world.

It was only a matter of time before this happened. At CES 2020, AMD finally made a huge power move into the laptop space with its Ryzen 4000 mobile lineup of processors. Covering both ultraportable devices and gaming laptops with its U- and H-Series chips, respectively, we imagine this is the first step toward AMD absolutely dominating the mainstream mobile platform.

Only time will tell how successful these processors will be, but if this release reflects the desktop market at all, Intel will probably have the toughest fight in its life ahead of it. And we can't wait to watch it all go down.

If CES 2020 proved anything, it's that foldable laptops are definitely going to be a thing in the very near future - and the Lenovo Thinkpad X1 Fold will probably be the first in the hands of everyday consumers.

Granted, we saw this foldable computer back in May 2019, but back then it was simply a concept. At CES 2020, however, we discovered it's going to actually be released to consumers in 2020, and if it can beat the Microsoft Surface Neo, Lenovo might actually be able to claim the title of "first foldable laptop to market," which will see the brand enjoy all kinds of early adopters.

You can't really look anywhere in the computing world right now without seeing 5G mentioned in some capacity, and with the MSI Aegis Ti5, that includes gaming desktops.

Not only is this a sick-looking gaming PC with one of the most unique PC cases we've seen from a non-boutique PC builder, but the inclusion of 5G leaves us truly perplexed. It is true that 5G could potentially secure faster data speeds than your average internet connection, but it's not really widely available at the moment. Maybe if every new piece of technology comes out with 5G compatibility, we'll see more areas bestowed with 5G - even places that aren't major cities.

The Nintendo Switch will probably go down in history as one of the most influential gaming devices of all time. The ability for a platform that serves as both a home console and a portable handheld game system is truly inspired. So, it shouldn't be surprising that Dell wants in on the action.

The Alienware Concept UFO is basically a Nintendo Switch but way thiccer and running Windows 10. Now, this makes it a less portable piece of kit, but it does mean it gives you access to the platform with more games than any other: PC. All we have to do now is wait to see if it ever actually comes out.

Right now in the computing world, there's nothing more curious than the vaunted Intel Xe graphics. We first heard that Intel would be making its own discrete graphics a couple of years ago, but since then we've just herd a lot of rumors and a bunch of really vague teases from Team Blue itself.

However, at CES 2020, we finally got to see Intel Xe in action with the DG1 GPU. Don't get your hopes up too much, though. We only saw it running Destiny 2 for 30 seconds, and we only got to play it for a few minutes behind closed doors, but it does mean that it is real. It might be a while before Intel's graphics are strong enough to compete with Nvidia and AMD, but at least we know it's actually coming.

If you're anything like us, you'll find that dropping wireless headsets while they're plugged in is definitely a thing that happens, and sometimes that damages the charging port. But what if your gaming headset had Qi wireless charging? That's what the HyperX Cloud Flight S delivers, and it could change the way we handle our headphones.

We just think there's something inherently cool about the idea of wearing a headset and then just laying it down on its side when you're done with it, letting it charge. Now, if only someone could just make one of those desk-length mousepads that also has Qi wireless charging so we could really take our laziness to the next level.

One of our favorite things about these major tech trade shows is the wide collection of absolutely bizarre things that will never (and, honestly, should never) exist. And the XPG Volta is definitely one of them. This is gigantic cylindrical PC case that can apparently fit three extra large graphics cards along with all the custom water cooling you could ever ask for.

We asked if this thing would ever come to market and we were told it would if "enough people write about it." So, here we are writing about it, probably doing irreparable harm to the world, but we can't help but be transfixed by the giant glowing battery of a PC case.

We've been giving Intel a hard time recently, thanks to its reluctance to release new desktop processors that really compete with AMD Ryzen 3rd Generation, but the Intel Ghost Canyon NUC is an absolutely amazing piece of equipment.

This is a tiny PC that's smaller than a gaming console, but can outpower both the Xbox One X and PS4 Pro without even trying. It'll obviously be much more expensive than those consoles, but that doesn't stop it from being a godsend for anyone who wants PC gaming in their living room without an obnoxious RGB-encrusted tower.

When AMD unveiled the Ryzen Threadripper 3990X, it literally took 3 screens to show how much faster it was than the Intel Core i9-9900K, which was a bit of an unfair comparison. Still, it was a way to get everyone's attention for a product that simply isn't for most folks.

This is definitely a processor that's meant for extremely hardcore computing tasks, like rendering a feature film, and subsequently, it's extremely expensive. You could buy two people-pleasing high-end gaming PCs for the same price as this one CPU. But, if you're the kind of person that genuinely needs 64-cores and 128-threads, you literally can't get this kind of performance for less money anywhere else.

Most people won't need it, but Nvidia and Asus teamed up to announce the ROG Strix 360Hz, a G-Sync monitor with - you guessed it - a 360Hz refresh rate. That's an insanely high refresh rate, and most people will never actually need it.

However, if you're a super competitive esports gamer, you can definitely get some improvement out of this thing. Hell, it made us slightly better in Counter-Strike, and we are basically the worst gamers on the surface of the planet.