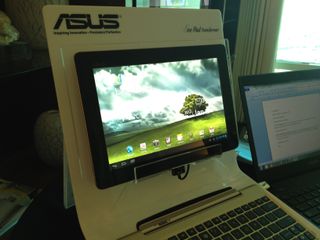 It's been an exciting week for new products, with CES bringing wave after wave of product launches from the big names.

We've been able to have a gander at some of the most interesting kit being shown off at CES, while also reviewing some really excellent products back at home as well.

We've got a lovely Toshiba TV for you, which offers brilliant performance and good looks at a bargainous price, as well as the new Asus Eee Pad Transformer, and an exciting new Sony Android phone.

The Eee Pad Transformer Prime TF201 is our favourite Android tablet and has recently been updated to Android 4.0. But instead of basking in the glory of past products, Asus has its attention set firmly on future endeavours and has already shown off the next evolution - the Prime 700 series.

It packs the same Tegra 3 quad-core CPU, but to make better use of the power has a much higher res screen. Out goes the TF201's 1,280 x 800 display and in comes a 1,920 x 1,200 panel. That makes it capable of both playing back and displaying full HD video which makes it extremely desirable – first impressions are very positive indeed.

Sony announced the Xperia S a few days ago and we've had a look at it on the show floor at CES. It's the second Android phone Sony has launched since it parted ways with Ericsson, and packs a 12MP camera, a dual core 1.5GHz processor, the ability to record in 1080p (on the rear), but sadly it only runs on Android 2.3 at launch.

The phone will however, be updated to Android 4.0 but not until the second half of 2012. It'll go on sale in March and we'll bring you a full review very soon but in the meantime check out our first impressions!

For its money, the Toshiba 46TL868B is a really excellent TV. It cunningly ticks all of the key feature boxes right now - Freeview HD tuner, active 3D playback, USB and network multimedia playback, Edge LED lighting - and encases them in a fashionably thin chassis that wouldn't look out of place on a TV costing twice as much.

As if that wasn't enough, it also delivers HD 2D and 3D picture performances so clean, bright, colourful and sharp that they make the efforts of many other 'budget' LCD TVs seem positively grubby by comparison. The Toshiba 46TL868B is one of Toshiba's biggest bargains yet.

The Leica D-Lux 5 Titanium is based on Panasonic's excellent LX5 compact camera. The two cameras are essentially the same, with the Leica badge adding a premium of about 100% to the price. So, brand loyalty aside, the Leica D-Lux 5 Titanium is incredibly expensive for what could be classed as a glorified snapshot camera. And for all its metal-bodied luxury it really is that at its core - it fits in your pocket and the lens on the front cannot be changed. But at least it is a well above average one.

Intel seems to have the entire notebook industry under the Ultrabook's thrall, and Dell is no exception with the launch of the Dell XPS 13. It might not come with LG's over-enthusiastic Super prefix, but the XPS 13 is a nice bit of kit – 18mm at its thickest point and with a 13.3-inch Gorilla glass display housed in the chassis of a 12-incher it certainly looks the part.

It's an Ultrabook so of course it comes with an Intel Core i7 processor with Intel HD 3000 graphics and fast boot facilitated by Intel rapid start. We have misgivings over the quality of the screen but we reserve final judgement until we've seen the final model.

This week's other reviews

Hands on: Lenovo IdeaPad U310 and IdeaPad U410 review

Hands on: Kivic One review